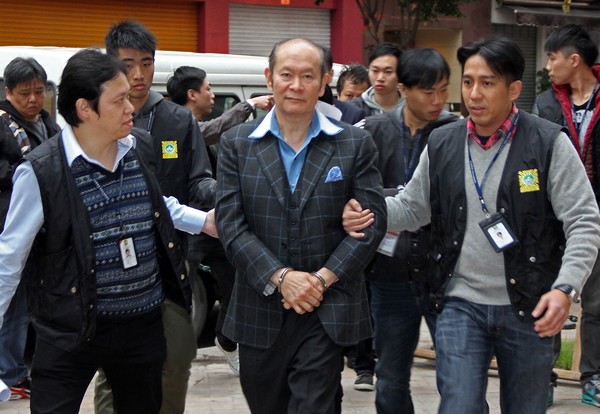 This handout picture released by Apple Daily on January 13, 2015 shows Alan Ho (C) being led away by police officers on January 12, 2015 after his arrest. Chinese gambling enclave Macau has busted a major prostitution ring comprising nearly 100 sex workers and arrested the nephew of gaming tycoon Stanley Ho, who is involved with the ring, city authorities said. CHINA OUT HONG KONG OUT TAIWAN OUT AFP PHOTO / APPLE DAILY - EDITORS NOTE - RESTRICTED TO EDITORIAL USE - MANDATORY CREDIT "AFP PHOTO / APPLE DAILY" - NO MARKETING - NO ADVERTISING CAMPAIGNS - NO INTERNET - DISTRIBUTED AS A SERVICE TO CLIENTS - NO ARCHIVES
18 March 201627 March 2016 BY STAFF REPORTER
BY STAFF REPORTER18 March 201627 March 2016

However, five of the sextet – including Ho – were released after the sentencing as the time they spent on remand behind bars in the run-up to the trial exceeded their prison sentences.

Ho, along with the other defendants, was arrested on January 10 last year for a prostitution ring involving 96 sex workers at Hotel Lisboa between 2013 and 2014, leading to a “turnover” of 400 million patacas a year.

The six had been remanded in custody at Macau Prison in Coloane until Thursday’s sentencing.

The high-profile case is known as the “paddock” case in Chinese, as prostitutes used to look for clients in a 50-metre-long circular-shaped corridor in the casino-hotel’s lower ground floor shopping centre in the past. Tongue-in-cheek, people drew a comparison between the place and the paddock where horses are paraded before a race.

The case is the largest prostitution ring bust in Macau since the 1999 handover.

The trial started on January 8 this year and included a number of hearings.

Announcing the sentences, Ribeiro pointed out that the group assigned 120 hotel rooms on the 5th and 6th floors for use by the sex workers.

While there was no evidence pointing to Ho having received money from the operation, Ribeiro said with Ho having been the executive director of the hotel, i.e. the “top decision-maker” at the hotel until the time of his arrest, it was proven that he had allowed prostitution to be carried out at the hotel, and because of that was sentenced to 13 months behind bars.

Wang, who was found to have taken money from the prostitutes either herself or via a third-party, received the harshest sentence of 29 months. However, she was also allowed to go free for the time being until her sentence takes effect. She was barred from leaving the city and will have to report to the Public Security Police (PSP) every week.

The four other defendants were handed down jail sentences of five to seven months.

However, due to the time Ho and the four other defendants spent in custody awaiting trial, they were considered to have served their sentences and were released on Thrusday.

Ribeiro also said that there was not enough evidence to prove that the six defendants headed a criminal organisation or participated in one as what the defendants had done did not meet the legal definition of the organised crime charges.

Prostitution is not illegal in Macau but procuring is.

The Public Prosecution Office (MP) has not announced yet whether it plans to appeal.