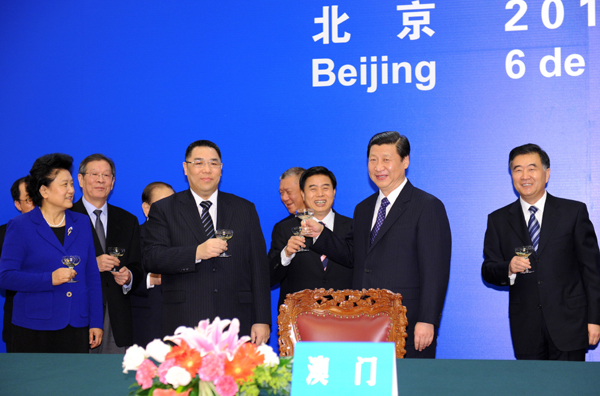 Macau, China, 7 Mar – Macau and Guangdong signed a framework cooperation agreement in Beijing Sunday in a ceremony wit-nessed by Vice-President Xi Jinping who oversees Macau and Hong Kong affairs for the central government.

Guangdong Governor Huang Huahua said that the pact was creating the foundation and setting the principles and targets for bilateral cooperation in the next decade.
The accord, which took effect Sunday, remains effective until December 31,2020.

Huang made the remark in a speech before the signing ceremony at the Great Hall of the People in Beijing.

Chief Executive Fernando Chui Sai On said in his speech the pact was proof that Macau and Guangdong were committed to promoting closer bilateral cooperation.

Huang and Chui met reporters after a brief meeting with top officials from the central government at the Great Hall of the People.

Huang said that the framework, which provides for the joint development of Hengqin island and cooperation in a wide range of areas, would help further boost cooperation between the two sides.

Chui said that the framework would further help Macau grow into an international tourism hub by giving the city more opportunities for economic diversification, such as the development of a traditional Chinese medicine (TCM) park in Hengqin.

According to the framework, the basic principles of the agreement are to promote economic diversification in Macau and develop a so-called Guangdong-Macau Cooperative Industrial Park.

The pact also states the two sides will gradually extend the opening hours of their border checkpoints and that they will work to set up a 24-hour checkpoint at the Gongbei-Macau Barrier Gate checkpoint and allow cars from Macau to freely circulate in Hengqin, which covers 106 sq km -Macau’s land area stands at just 29.5 sqkm.

The future campus of the public University of Macau is being built on Hengqin on a plot of land leased from the central government. The campus will come under local jurisdiction during the 40-year leasehold.

Under the agreement, an area of five square kilometre will be set aside in Hengqin for Guangdong and Macau to co-develop traditional Chinese medicine and cultural, creative and educational industries.

The accord also states that Macau residents working and living in Hengqin will come under the mainland’s labour affairs regulations and social security system. Hengqin is part of the adjacent municipality of Zhuhai.

According to The Macau Post daily apart from Hengqin, Macau and Guangdong will also cooperate in the development of Nansha district of Guangzhou, namely for logistics and traditional Chinese medicine.

The agreement also sets a mechanism for bilateral meetings, which is scheduled to begin next month.