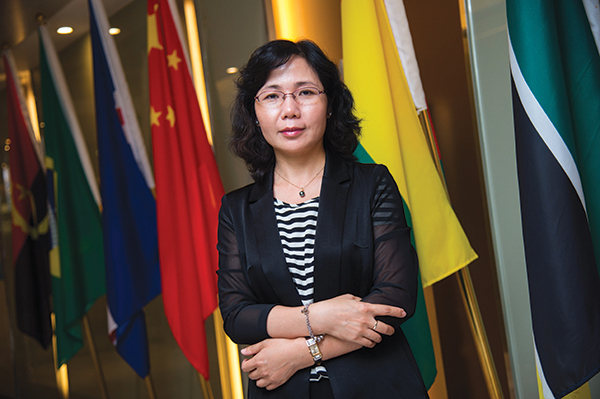 The permanent secretariat of Forum for Economic and Trade Cooperation between China and Portuguese-speaking Countries (PSCs) will push forward more pragmatic cooperation on production capacity and investment among the participants in next stage, head of the organ Xu Yingzhen told Xinhua in a interview.

The 5th Ministerial Conference of the Forum for Economic and Trade Co-operation between China and Portuguese-speaking Countries will be held in Macau from October 11 to October 12.

The theme for this edition of the conference will be: Working Toward Stronger PSCs Trade and Economic RelationsCombining Efforts, Jointly Building a Platform, Sharing Fruits of Development.

Sponsored by China’s Ministry of Commerce and hosted by the government of Macau Special Administrative Region (SAR), the forum was inaugurated here in 2003, with the joint participation of seven PSCs countries, including Angola, Brazil, Cape Verde, Guinea Bissau, Mozambique, Portugal and Timor-Leste.

New cooperation idea drawn from “Belt and Road” initiatives will be a highlight of this year’s summit, said Xu, noting that the core of this idea is to set sustainable ways of cooperation according to the different characteristics of each PSCs, to ensure all members benefit from the forum, especially the ordinary people.

Up to now, four ministerial conferences of the forum have been held here in 2003, 2006, 2010 and 2013 respectively, with each one concluding with an Action Plans for Economic and Cooperation which outlined the development vision and direction for cooperation covering those three years.

Xu recalled that the cooperation between China and PSCs just covers seven areas at the time when the forum was established, while the number increased to 17 in the last summit.

The average annual growth rate during that period reached at 28.4 percent, much higher than the increase rate of China’s foreign trade, Xu said.

Due to the overall downward trend of international trade market and consumer prices, the trade between China and PSCs decreased to 98 billion dollars in 2015. But Xu is optimistic that the situation will be reversed with the recovery of global trade environment.

The amount of investment from China in PSCs in 2003 was just 55.11 million US dollars, but it reached 4.5 billion US dollars by the end of 2015. There are also an estimated of 400 Chinese companies has opened their business in PSCs, according to Xu.

Besides economic and commercial cooperation, the forum has also made great achievements in promoting cultural exchanges and deepening the friendship between China and PSCs.

The scopes of Sino-Luso cooperation will be broadened further by the upcoming summit, Xu revealed.

The cooperation on production capacity and investment will be promoted later as more enterprises has explored markets abroad under the country’s “go out” strategy, Xu added.

Historical friendly relations as well as familiarity with the language, legal and trade system of in Portuguese countries make Macau an ideal place in connecting China and PSCs.

Since the establishment of the Forum, Macau has been positioned as a platform to promote the economic cooperation between China and PSCs, and its role of tie has been enhanced as the launch of three strategic centers, including a business and trade service center for the SMEs in PSCs, a distribution center for PCs’goods, and a convention and exhibition center for economic and trade cooperation among China, China’s Macau and PSCs.

Macau can further develop a financial service platform to support banking sector of the city to expand businesses in PSCs, Xu said.