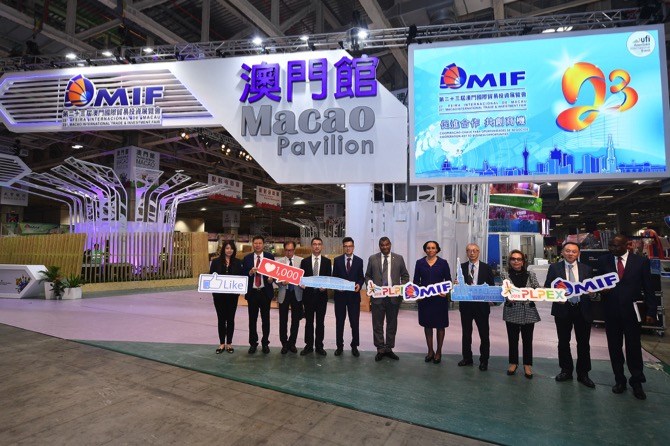 The 23rd Macao International Trade and Investment Fair (MIF) kicks off Thursday along with the 2018 Portuguese-speaking Countries Products and Services Exhibition (PLPEX).

The three-day event is themed “Co-operation – Key to Business Opportunities,” featuring a total of some 1,500 booths, with nearly 1,000 participating companies and institutions.

More than 30 themed events, including forums and conferences will take place during MIF and PLPEX.

The event is organized by the Macao Trade and Investment Promotion Institute (IPIM) and is co-organized by 15 economic and commercial departments as well as business associations from Macau, Mainland China, and Hong Kong.

During the same period, a number of summits, forums and roundtables covering economics, trade, exhibition and investment will also be held.

This year, MIF has invited Mozambique and Fujian Province as its partner country and partner province, respectively, thus setting up the “Mozambique Pavilion” and the “Fujian Pavilion.”

The Mozambican government bring a delegation of nearly 90 people to Macau, with some 14 Mozambican companies participating in the exhibition.

During a conference Tuesday, Ragendra Berta de Sousa, Minister of Industry and Commerce of Mozambique, called for investment from the local market, noting that they are here to “expand its horizons.”

“We also look to promote trade with China through MIF so industrialization will speed up,” he said. “We need investments to commercialize our products,” he added.

On the first day of the event, the “Mozambique-Fujian-Macau Trade and Investment Forum” will be staged, where the representatives from the three regions’ economic and trade departments and enterprises gather in a bid to expand co-operation and business opportunities.

According to Macau Daily Times, when announcing this year’s budget, Sam Lei, executive director of IPIM said, “the budget of MIF is about MOP30 million, while PLPEX’s is MOP8 million. We have more demand for booths in PLPEX. Last year, there were 220 booths but this year there will be 250 booths,” said Lei.

The 2018 PLPEX will roll out the “Brazil Unmanned Shop Experience Zone,” showcasing assorted Brazilian products with an innovative retailing approach.

The zone will combine a series of publicity and promotional activities to seek Sino-Brazilian economic trade and co-operation and cultural exchanges.

At the same time, the first “China-PSC [Portuguese- speaking Countries] E-commerce Experience Pavilion” and the “Portuguese-speaking Countries Cross-border E-Commerce Workshop” will be held to present the “cross-border e-commerce + new retail model”, with a view to helping merchants from lusophone countries to enter the Mainland market through online platforms.

During the PLPEX, local and international merchants will visit the Macao Young Entrepreneur Incubation Centre and the Macau Brand Incubation Center and participate in community tours.

In addition, after the exhibition, the organizer will arrange entrepreneurs from Portuguese-speaking countries and Macau to visit the cities of the Guangdong-Hong Kong-Macau Greater Bay Area, including Shenzhen and Zhongshan.

The tours will also include visits to local business associations and enterprises, as well as key local projects, giving companies from Portuguese- speaking countries a deeper understanding of the policies and development opportunities of the Greater Bay Area.

In addition to traditional credit card payment methods, new electronic payment services such as Macao Pass, M+Pay, and Alipay have been introduced to the SMEs Exhibition Area this year.

During this period, networking activities will be arranged for representatives of the ATPF and from the Guangdong-Hong Kong-Macau Greater Bay Area and local chambers of commerce, in an effort to create an effective exchange and matching platform.