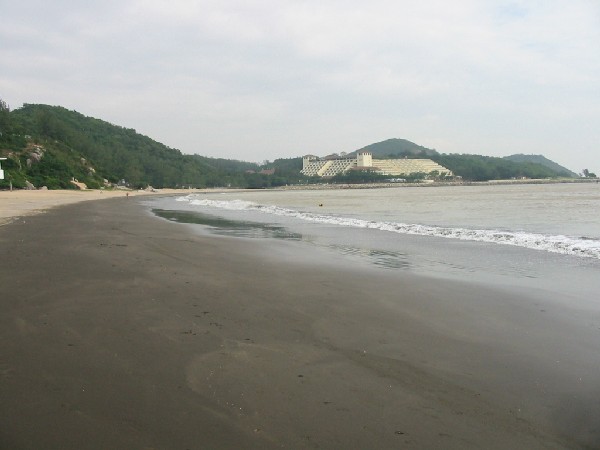 The joint statement from the Maritime Administration(CP) and the Environmental Protection Bureau (DSPA) pointed out that thegovernment met Sinopec Hong Kong General Manager Li Jianguo yesterday afternoonto verify that the polypropylene pellets were from the company’s containersthat were blown into the sea off Hong Kong by Typhoon Vicente on July 23.

According to the statement cited by The Macau PostDaily, Li stressed that the plastic raw material, which is widely used inpackaging, is non-toxic and vowed to assist the government in cleaning up HacSa and Cheoc Van beaches on which the plastic pellets have been washed ashore.

The statement said that about five kilogrammes ofplastic pellets have been collected so far since the government began cleaningthe beaches late Tuesday afternoon, adding that it would take another day ortwo to finish the job.

The statement added that while no plastic pellets havebeen found in the seawater, the government would keep a close eye on theongoing clean-up and the quality of the city’s coastal water.

“We’ve cleaned up Hac Sa Beach but there are stillsome [plastic pellets] scattered around Cheoc Van Beach,” a Maritime Administrationspokesperson told The Macau Post Daily last night, adding that since just asmall amount was involved, the situation did not pose any immediate harm toswimmers. However, the spokesperson urged parents to keep an eye on theirchildren in case they found the plastic pellets and put them in their mouths.

Meanwhile, the Civic and Municipal Affairs Bureau(IACM) yesterday denied claims by some local residents that they had found thepellets in shrimps bought from local wet markets. An IACM spokesperson saidthat what appeared to be plastic pellets were actually the reproductive organsof female shrimps.

Most of the pellets washed ashore beaches in Hong Kongearlier this month. (macaunews)

2017 MIECF opened with green innovation as the main focus