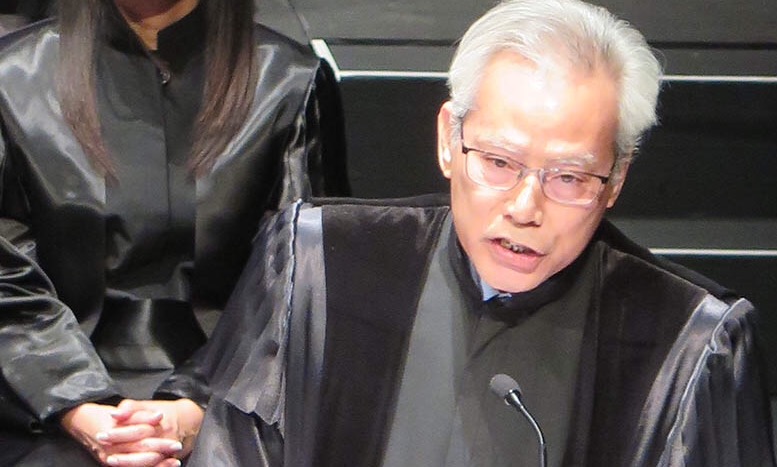 Court of Final Appeal (TUI) President Sam Hou Fai warned that a rising number of gaming-related crimes appeared to extend beyond casinos, pointing out that there have been several cases in which gamblers died while they were being held against their will by loan sharks.

Sam made the remarks on Wednesday when delivering a speech at the opening ceremony of the Judicial Year 2016/17, at the Macau Cultural Centre in Nape.

According to the Judicial Organisation Framework Law, the judicial year in Macau starts on September 1 every year, for which a solemn ceremony is held to mark the commencement. The courts are in summer recess in August.

According to Sam, during the outgoing Judicial Year 2015/16, the Examining Magistracy of the Court of First Instance (TJB) probed 697 gaming-related crimes including cases in which gamblers were held against their will by loan sharks over gambling loans.

Sam said that the number of the 697 cases was 38 per cent up from the previous Judicial Year 2014/15. He did not specify how many of the cases involved the false imprisonment of gamblers by loan sharks.

Sam said there were even several cases in which gamblers died while they were being held against their will by loan sharks, adding that the situation deserved concern.

Over the past few months, several such cases in which gamblers committed suicide during false imprisonment or fell to their deaths trying to escape their captors have been reported.

Sam said the situation suggested that gaming-related crimes appeared to extend beyond casinos.

Sam warned that if the situation was not curtailed, it would cause an adverse impact on the city’s key industry – the gaming sector.

Sam also said that the number of detentions for having illegally entered Macau or having overstayed in Macau had risen “enormously”.

Many of the cases involved gangs that provided assistance to those who wanted to enter Macau illegally, Sam pointed out.

Tourism of Portugal representatives meet in Macau and look to China