Secretary for Social Affairs and Culture Alexis Tam Chong Veng said Thursday that Macau was providing a platform for the travel trades from Portugal and China to meet. 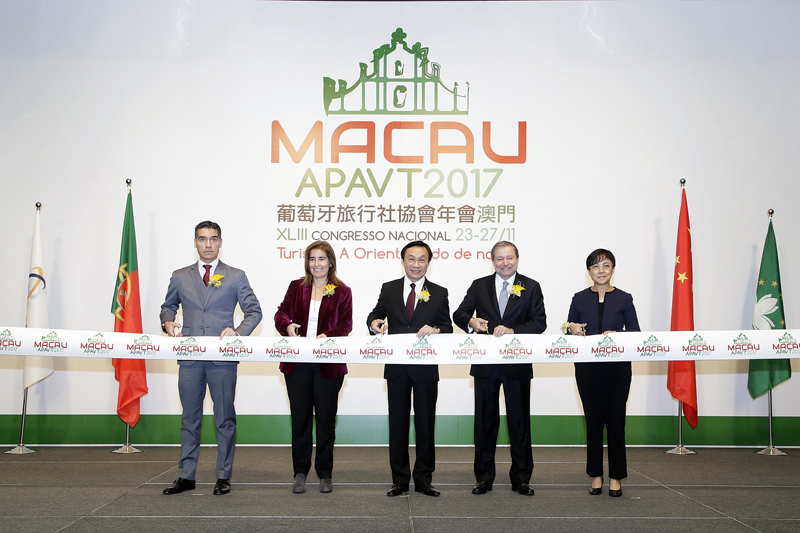 Secretary for Social Affairs and Culture Alexis Tam Chong Veng said Thursday that Macau was providing a platform for the travel trades from Portugal and China to meet.

Tam made the remarks in speech during the opening ceremony of the National Congress of the Portuguese Association of Travel and Tourism Agencies (APAVT) at the Macau Tower Convention and Entertainment Centre.

The association was established in 1950 as a representative organisation of the Portuguese travel and tourism.industry.

The theme this year is “Tourism: In the East, all new!”

Encouraging the association to seize the opportunities of multi-destination tourism, Tam said, “Macau is participating in the Belt and Road Initiative, as well as the new development of a city cluster in the Guangdong-Hong Kong-Macau Greater Bay Area, which are both national-led development projects that are set to continue to bring more opportunities and open new horizons to Macau and our partners. The upcoming opening of the Hong Kong-Zhu-hai-Macau Bridge will become yet another key element to boost tourism in the region, mainly in the context of multi-destination tourism…”.

The workshops during the congress enable Portuguese travel agencies to meet representatives of around 50 travel agencies from over 20 mainland cities, including Beijing, Guangzhou, Haikou and Xiamen.

Mendes Godinho said that the Macau platform was important as it is providing a comparative advantage to her country.

Mentioning the disastrous wildfires in central Portugal this year, which caused over 100 fatalities, she stressed that the catastrophe united the country.

She also said that tourism would help the whole country in general and the affected areas in particular to recover from the tragedy.

The closing ceremony of the congress will be held Saturday.