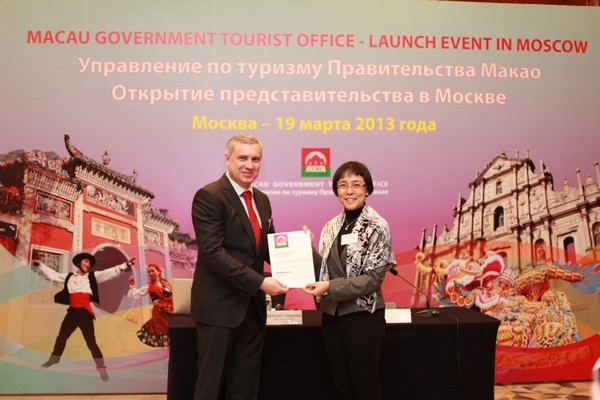 The Macau Government Tourist Office (MGTO) Tuesday opened a representative office in Moscow, taking advantage of the peak period of travel shows in the country,the office said in a statement.

Macau is also joining hands with Hong Kong to promote the two cities as one destination, to tap the potential of the Russian tourism market.

“We are very excited to open a representative office here in Moscow following a few years conducting seasonal promotions to test the market. Russia is one of the most sought-after markets in the world in terms of tourism potential and for Macau the Russian market is the fastest growing emerging market,” Senna Fernandes said at the luncheon.

The formal opening of the MGTO representative office in Moscow coincided with a string of tourism trade fairs taking place in the Russian capital this month.

The MGTO director, along with a delegation representing two local travel agencies and two hotels, is participating in MITT, which is considered the main international travel show held annually in Russia.

MGTO is also organising a joint event with the Hong Kong Tourism Board (HKTB) to promote the two cities as one destination for Russian travelers. Both delegations will co-host a presentation of the two destinations for Russian media and travel traderepresentatives Thursday.

Following several years of organising regular promotions in Russia, MGTO decided to open a representative in Moscow which started operations in January. There has been a reciprocal visa-free policy in force between Macau and Russia since October 2012.(macaunews)