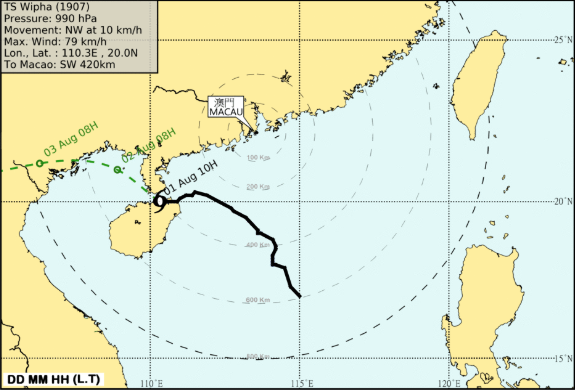 Macau was at a standstill for 11 and a half hours due to the passage of Typhoon Wipha.

Six people were injured and 29 accidents related to falling objects were reported.

Signal No. 8 came into effect from 2:00PM on Wednesday until 1:30AM Thursday. Soon after, the Macao Meteorological and Geophysical Bureau replaced it with the Signal No. 3.

According to the update from the Macau international Airport at 1:35AM, 55 outgoing flights and 55 incoming flights were cancelled due to Typhoon Wipha.

24 people took to refuge shelters across the city.

Typhoon Wipha came as close as 280km southwest of Macau at 11:00PM and has since moved away.

Typhoon Signal No. 8 signifies winds with speeds of 63-117 km/h and may exceed 180 km/h in Macao. It is only two signals away from Signal No. 10, which is hurricane-force winds that exceeds 118 km/h. (MacauNews)