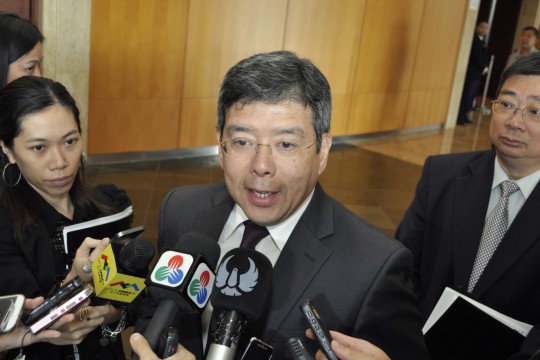 The government won’t allow the monthly rental of parking spaces in new car parks but drivers who currently rent spaces won’t have their monthly passes cancelled and will still be able to rent them.

This is what Secretary for Transport and Public Works Raimundo do Rosario said during a plenary session in the legislature on Tuesday, in contrast to the government’s previous announcement that all the monthly car park passes would be scrapped. The Transport Consultative Council said in April that the government would abolish the policy, which allows public car parks to provide spaces that can be rented monthly, which would have affected 11 car parks.

Lawmaker Wong Kit Cheng asked Rosario during Tuesday’s Q&A session about the government’s measures to control the number of motor vehicles. She questioned the merit of scrapping the monthly car park passes, wondering if the measure would really alleviate the shortage of parking spaces.

Rosario admitted that adjusting taxes and car park fees were not the most effective ways to control the number of vehicles on the roads. However, he was quick to add that a consensus on the matter was needed.

“We won’t encourage the monthly rental of car park spaces …, there won’t be any spaces for monthly rental in new car parks,” said Rosario, adding, “… I hope that everyone is clear about that. I won’t cancel this system. Those who have [monthly] passes can keep them.”

The policy secretary added: “We won’t increase the number of [monthly] passes because there won’t be monthly passes for new car parks,” making it clear that the measure only applies to car parks opening in the future.
Rosario also said that the existing car park spaces paid for monthly are not transferrable, meaning that once the holder dies or forfeits the space they cannot be passed on. He also pledged to improve the city’s public transport services in an attempt to curb the further increase in the number of private vehicles.

According to official statistics, Macau had 243,000 licensed motor vehicles at the end of May, up 5.1 percent year-on-year.

The policy secretary was asked by reporters during the session’s break whether the government had bowed to public pressure and changed its approach to curbing the number of vehicles. Rosario said he had not changed his stance, adding he wondered why the public interpreted what he had said differently.
“Based on my own understanding – since my Chinese is not that good – nothing has changed. Lawmaker Jose Pereira Coutinho once asked me about it and I told him what I said today.”

Chiang Ngoc Vai, acting director of the Transport Bureau (DSAT), said there were 12 public car parks under construction, most of them situated in public housing estates. Chiang added that they will provide about 7,100 parking places.

Asked by reporters about the monthly parking passes, Chiang said that he could not remember if he had said anything to the Transport Consultative Council members about abolishing the passes.

Rosario also said that “everyone agrees” that the current public car park fee of two patacas per hour is “very cheap”. (macaunews/macaupost)

Macau corruption trial of Hong Kong tycoons may be adjourned