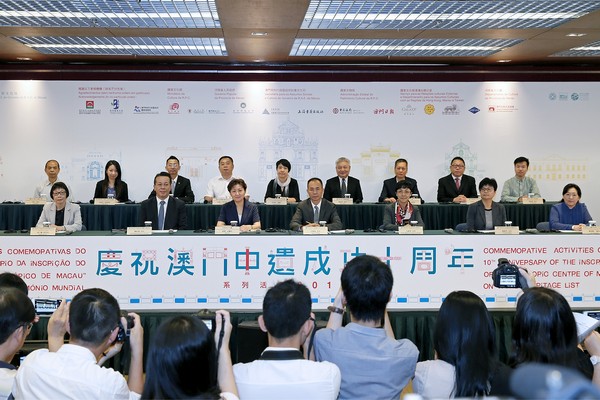 Macau is celebrating the 10th anniversary of the induction of the city’s historic center into the UNESCO World Heritage list with a special cooperative effort with Henan, since the Chinese province has vast experience in protecting its cultural heritage, the Cultural Affairs Bureau (IC) president, Ung Vai Meng, noted at a press conference on Wednesday.

“We always try to cooperate with different Chinese provinces to exchange views on cultural heritage preservation. This time we chose Henan because we believe it’s a province with vast experience in safeguarding its intangible heritage,” said Mr Ung.  He added that, “we need to learn from each others’ experiences,” while furthering our knowledge of Henan’s rich cultural heritage.

Ms Kang Jie, vice-director of the Henan province department of culture, revealed at Wednesday’s press conference that a number of Henan province’s cultural artefacts will be showcased this Saturday at Galaxy Macau’s east square as part of an exhibition entitled “Genesis and Spirit.”
Ten cultural heritage items will be on display, including clay dogs from the Huaiyang municipality, collages with wheat stems, and Yellow River carved Ink stones.

On Saturday afternoon, artistic performances will be held at St Paul’s Ruins, featuring Shaolin martial arts, Tai Chi, and Henan opera. The activities are set to continue on Sunday at the Mandarin’s House with a lecture on the protection of Henan’s cultural heritage.

Marking the 10th anniversary of Macau’s historic center being added to the UNESCO World Heritage list, the IC will hold a series of activities in a total of 35 events, including exhibitions, cultural performances, seminars, and book launches. Mr Ung revealed on Wednesday that the budget for these activities is MOP3.3 million.

The IC said that new and renovated historic and cultural facilities will begin operation in June. The Guia Fortress Information Center will be opened by the end of this month and will feature a brief introduction to the history of the Guia fortress.

Furthermore, local and foreign experts will be gathering to participate in the International Academic Seminar on the Conservation of Cultural Heritage to be held on July 12. Several works on Macau’s cultural heritage and its protection will also be launched during the event.

The Macau Orchestra, the Macau Chinese Orchestra and the Macau Conservatory’s Schools of Music and Theatre will be performing at the city’s World Heritage sites.

Mr Ung reiterated Macau’s efforts to preserve its listed sites. He added that the department has also conducted archeological excavations, namely in Coloane. He told reporters that they expect to have reach a decision on what do with artefacts discovered in the Coloane village excavation by the end of this month. (macaunews/macaudailytimes)

Cybersecurity commission to start on Dec 22

Macau authorities look for 550 visitors from Hubei and Wuhan