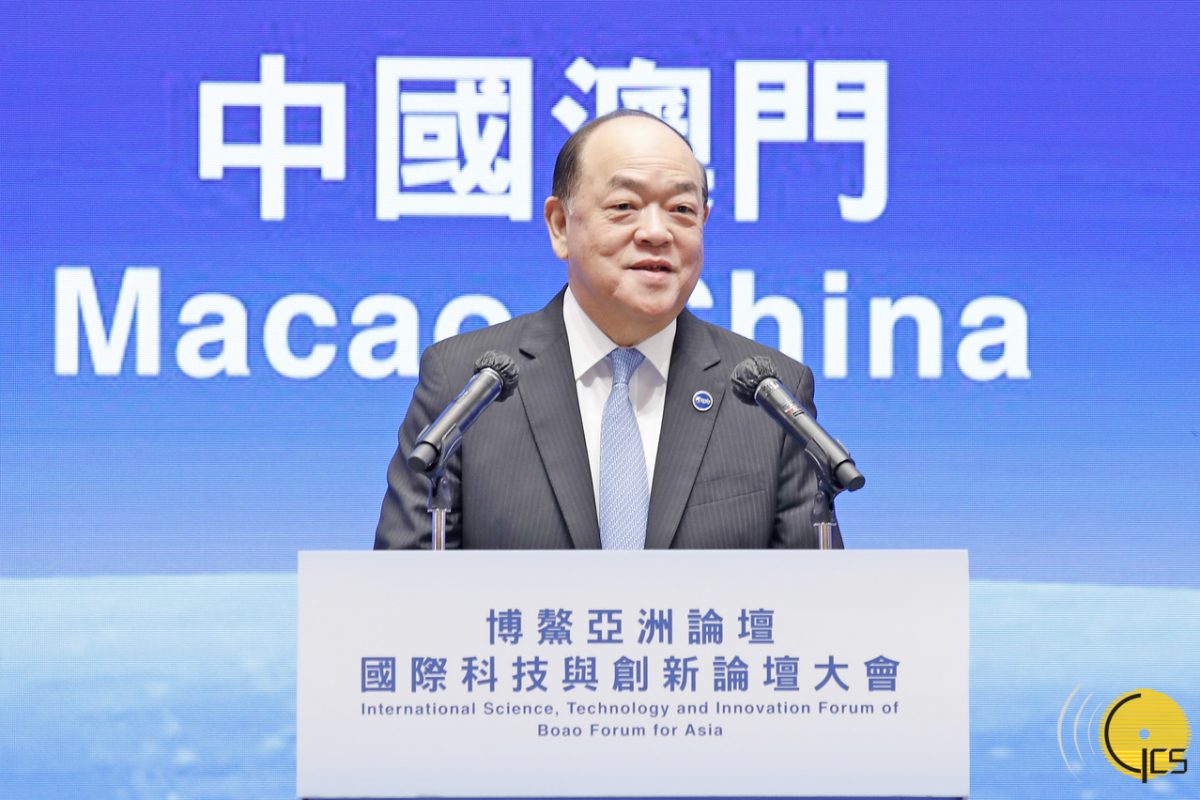 Macao Chief Executive Ho Iat Seng said today the government would further strengthen “top-down design” regarding innovation in the field of science and technology (sci-tech), including continuously improve the institutional mechanism for sci-tech innovation and the mechanism for commercialising sci-tech research.

Speaking at the opening of the International Science, Technology and Innovation Forum (ISTIF) of the Boao Forum for Asia (BFA), Ho said that enterprises were encouraged actively to apply advanced technologies for transformation and upgrade of business practices, and to explore a market-driven development model that integrated the effort of industry, academia and research resources.

The first edition of ISTIF, being held in Macao until 12 November, has as its theme  “Innovation Empowers Sustainable Development”.

The event is being co-organised by the Boao Forum for Asia and Macao government.

The chief executive expressed his gratitude to President Xi Jinping for sending a congratulatory message to ISTIF; and to Vice-Premier of the State Council Han Zheng for his remarks made via video link.

“Their contribution reflected the immense importance the country’s leadership attached to ISTIF, and its high expectations regarding outcomes from the event” he said.

In his speech, Ho said the spirit of scientific development outlined by Xi had great significance for Macao.

In a speech delivered at the recent grand gathering marking the 40th anniversary of the establishment of the Shenzhen Special Economic Zone, Xi had pointed out that innovation was the country’s primary driving force, and that the country should unswervingly implement the strategy of such development, foster new ways of boosting the economy, build fresh momentum, and develop technological and industrial innovation on a higher level, so that it had global influence.

The future was likely to offer difficulties and hope, challenges and opportunities. The world was experiencing changes of a magnitude not seen in centuries, and the pandemic was further accelerating these profound changes, Ho said.

In response to the new situation, the country had proposed to accelerate the formation of a new, “dual circulation” pattern of development, whereby the domestic economic cycle played a leading role while the international economic cycle remained as its extension and supplement. Macao was where the two parts of the pattern met. For Macao, this was not only an opportunity and an advantage, but also a responsibility and a duty, Ho said.

Macao would continue to adhere to the “one country” principle while taking advantage of the benefits offered by the “two systems”, the Chief Executive said.

Ho Iat Seng  also said that Macao would also integrate into the national development strategy, make full use of its special status and unique advantages, give full play to its role as a platform, actively participate in the Belt and Road Initiative and the construction of the Guangdong-Hong Kong-Macao Greater Bay Area (GBA), and further deepen and expand domestic and international exchanges and cooperation in economic, trade and technology matters.

While continuing to promote the moderate diversification and sustainable development of its economy, Macao would also exert all its strengths to help the country achieve a higher level of opening up, and of higher-quality development, Ho concluded.