Local woman, back from Spain, and husband taken to quarantine centre

A local woman who had been to Spain was taken to the Health Bureau’s (SSM) Public Health Clinical Centre in Coloane for quarantine, after seeking treatment for a fever. 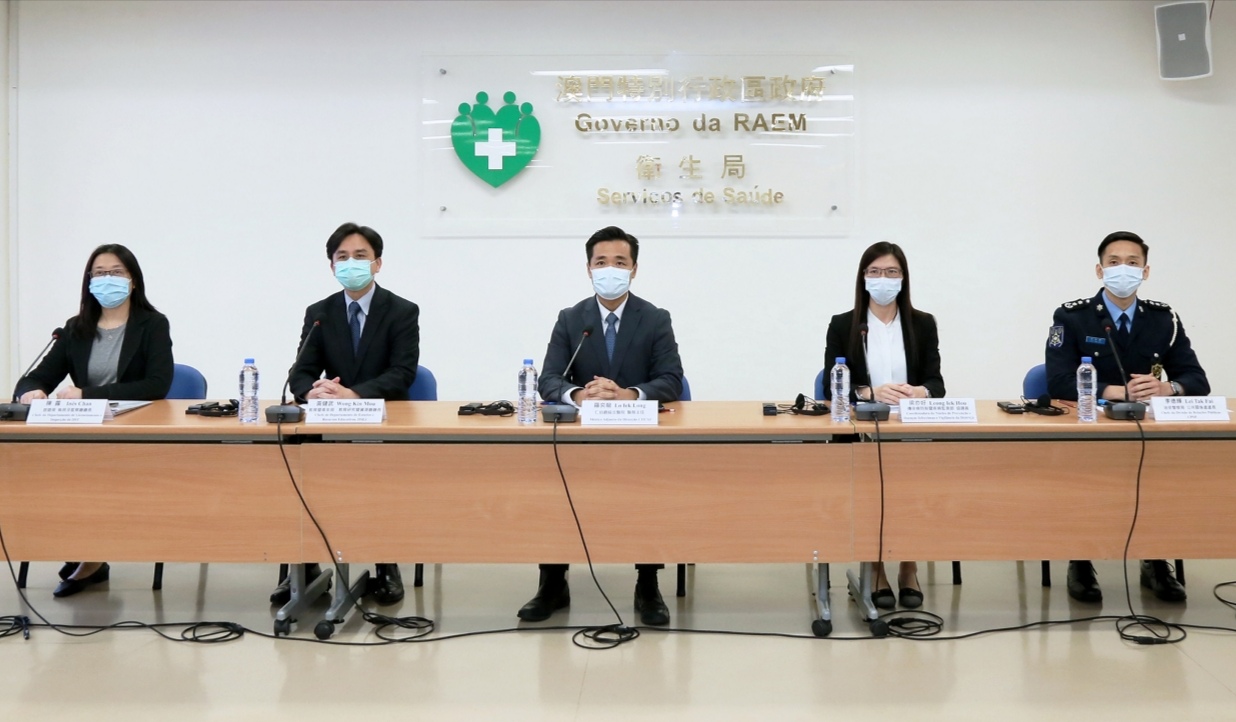 Addressing Wednesday’s daily press conference about the local government’s ongoing fight against the novel coronavirus (COVID-19) threat, Lo Iek Long, a clinical director of the public Conde de São Januário Hospital Centre, said that a local woman who had been to Spain were taken to the Health Bureau’s (SSM) Public Health Clinical Centre in Coloane on Tuesday for quarantine, after seeking treatment for a fever, while her husband was also transferred to the centre in Coloane because of his “close contact” situation.

According to Lo, the couple have been classified as having a “high risk” of being infected with the novel coronavirus (COVID-19). The couple’s first COVID-19 test came out negative. Both will undergo a second test 48 hours after the first test.

Lo made the remarks on Wednesday evening at the bureau adjacent to the public hospital.

According to Lo, the woman left Macau on February 28 for a trip to Spain before returning to Macau via Germany on March 4. The woman came down with a fever and cough on Tuesday and went to the public hospital’s emergency department to seek treatment. The woman underwent her first COVID-19 test on Tuesday. She tested negative for the novel coronavirus, Lo said.

Lo said that her husband, who had not left Macau, had had a fever for three days. Consequently, in addition to the woman, her husband was also taken to the quarantine facility in Coloane on Tuesday, Lo said. The man also tested negative in his first COVID-19 test.

Lo said that the couple would undergo another COVID-19 test 48 hours after their first test. Lo did not say whether the couple would have to stay under quarantine in the Public Health Clinical Centre for 14 days. Lo merely said that if the couple test negative in the second test, they could be confirmed as “safe”, apart from the fact that they were free from fever on Wednesday.

According to Lo, apart from the couple, 60 people are currently staying under medical surveillance in the Public Health Clinical Centre, comprising the 57 Macau residents who were evacuated from Hubei province on Saturday and the three local COVID-19 patients who have been discharged from hospital.

The 57 Macau residents were immediately taken to the Public Health Clinical Centre for 14-day quarantine after a charter plane airlifting them from Hubei arrived at the local airport on Saturday evening. Lo said on Wednesday that none of the 57 Macau residents has come down with a fever or any respiratory symptoms so far.

Lo noted that Macau has not confirmed a new COVID-19 case for 36 consecutive days. Macau’s last two COVID-19 cases, the 9th and 10th cases, were confirmed on February 4. All of the 10 COVID-19 patients – seven tourists from Wuhan and three locals – have been discharged from hospital.

Lo said on Wednesday that Macau’s 10th COVID-19 patient – the first local discharged patient – will complete his 14-day medical surveillance at the Public Health Clinical Centre today and then start his 14-day “self-health management” in his home. Lo described the conditions of the three discharged local patients staying at the Public Health Clinical Centre as “good”.

According to Lo, the recovered patients undergoing the 14-day “self-health management” at home are advised to avoid going out unless necessary.

Since midday on Tuesday, all those who have been to Germany, France, Spain or Japan within the past 14 days prior to their entry into Macau have to stay under medical surveillance for 14 days.

Late last month, identical quarantine measures were imposed by the Health Bureau on arrivals from South Korea, Italy and Iran.

Non-Macau residents – visitors and non-resident workers – have to go into the 14-day quarantine at government-designated hotel – Pousada Marina Infante in Cotai – at their own expense, while local residents can choose to go into the 14-day quarantine either in their home or at the hotel, depending on whether their flat can meet certain requirements, such as whether they need to share a bedroom.

Meanwhile, SSM Control of Communicable Diseases and Surveillance of Diseases Department Coordinator Leong Iek Hou said during Wednesday’s press conference – which started at 5 p.m. – that two local residents – a couple – who have been to Egypt would later be taken to the Public Health Clinical Centre in Coloane for 14-day quarantine. According to Leong, the two locals – a 64-year-old man and his 60-year-old wife – were travelling on the same flight from Hong Kong to Egypt and the same return flight as a Hong Kong resident who has been confirmed by the Hong Kong authorities as having been infected with the novel coronavirus. Leong said that therefore the two Macau residents have been classified as having been in close contact with a confirmed COVID-19 patient and therefore need to be quarantined at the centre.

Both tested negative twice to COVID-19, according to Leong.