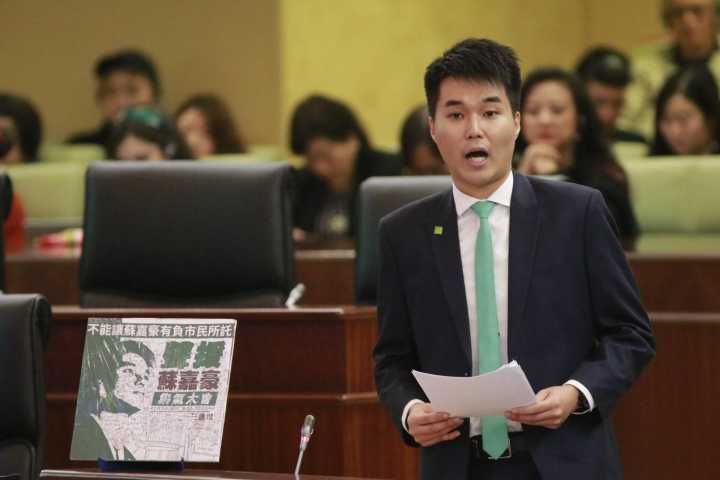 Some 85 percent of the members of the Legislative Assembly (AL) voted Monday for the suspension of directly-elected lawmaker Sulu Sou Ka Hou from the legislature so that he can stand trial for alleged aggravated disobedience.

During a plenary session of the 33-member legislature, 28 lawmakers voted for Sou’s suspension while four legislators voted against. The vote was carried out by secret ballot. The suspension issue was the only item on the agenda of the plenum.

Sou was not allowed to vote on the matter, as it was about him, according to the Legislative Assembly Lawmakers Statute.

Legislative Assembly (AL) President Ho Iat Seng cast his vote yesterday. When voting on bills, the speaker of the legislature customarily does not vote.

Speaking to reporters after the vote, Sou said he regretted the outcome of the vote. He said that most of the lawmakers chose to ignore “the nature of solemnity and independence” of the legislature by voting for his suspension.

Sou, 26, urged Macau residents not to “feel frustrated” about the outcome of the ballot. He asked residents to “transform their sadness and anger into motivation to push for social progress”.

Ho said in a statement on November 13 that the Court of First Instance (TJB) had requested the legislature to make a decision on whether Sou was to be suspended from the legislature so that he could stand trial for the alleged crime. Ho also said in the statement said he requested the House Rules Committee to study and announce its opinions on the court’s request.

Sou’s suspension will allow the trial to go ahead. It is the first suspension of a lawmaker since the 1999 handover.

Prosecution of offences allegedly committed by a lawmaker that are punishable by less than three years must be authorised by the legislature, according to the statute on legislators.

According to the statute, after the House Rules Committee had given its opinion on the issue, it would then have to be discussed and submitted to vote by a plenary session, to decide whether Sou should be suspended for the trial to go ahead.

According to the statute, a lawmaker’s suspension requires that more than half of the legislature’s 33 members vote for it in a plenary session on the matter.

According to Article 312 of the Macau Penal Code, aggravated disobedience is punishable by a fine or up to two years behind bars.

The House Rules Committee held two meetings on the matter last month. The seven-member committee submitted a report about the committee’s opinion on the court’s request to Ho on November 20.

After the 32 lawmakers cast their votes on the issue yesterday afternoon, Ho said during yesterday’s plenary session that the legislature would inform the court about the outcome of the vote, for the court to decide on a new date for Sou’s trial. Sou’s suspension takes effect today, according to Ho.

According to Ho, Sou’s suspension means that he is temporarily prevented from carrying out his legislative duties, such as attending meetings, voting on bills and any other decisions such as motions and resolutions, and initiating bills. Ho noted that Sou will continue to receive his salary, allowances and enjoy the normal benefits of a lawmaker.

Speaking to the media after the vote, Sou said that now he needed to prepare for the upcoming trial. He said he believed that the court will acquit him, so that he can resume his duties as a lawmaker to monitor the government as well as debating and reviewing bills.

According to the Macau Post Daily, Sou deplored that the discussion by lawmakers during yesterday’s plenary session primarily focused on technical and procedural matters about the court’s request. He said that most of the few lawmakers who spoke during the plenum evaded stating their stance on the matter, adding that they failed to discuss the core issue of the predicament.

“The core of the matter is that whether a lawmaker should be suspended from the legislature so that he or she can stand trial for an alleged crime,” the non-establishment lawmaker said.

“A decision not to suspend a lawmaker is the embodiment of the legislature functioning independently and [the embodiment] of protecting him or her from political intervention,” Sou said.

Sou apologised to residents for being temporarily unable to carry out his duties as a lawmaker and monitor the government. He pledged that he will continue to provide assistance to residents.

Sou also said that he did not know which lawmaker cast which vote, adding that he would not speculate about it.

The crime of aggravated disobedience was allegedly committed by the duo outside the official residence of Chief Executive Fernando Chui Sai On in a verbal confrontation with the police.

According to the lawmakers’ statute, if Sou is sentenced to a prison term of over 30 days, his fellow legislators would have to hold another plenary session to decide whether to expel him from the legislature, in which case a by-election would have to be held.

Defendants in previous aggravated disobedience trials have been fined.

Sou, who holds a bachelor’s degree in political science and public administration from a university in Taiwan where he is enrolled in a political science master’s degree course, is the legislature’s youngest member. He’s is a member of the grassroots New Macau Association (NMA).