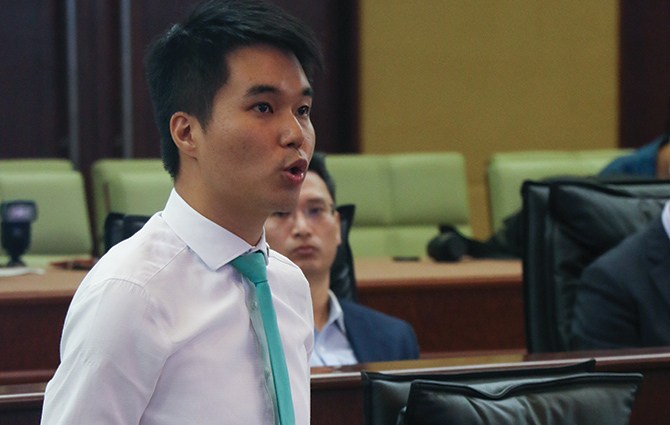 Lawmaker Sulu Sou filed an appeal to the Court of Second Instance (TSI) last week for the annulment of his suspension from the Legislative Assembly.

Sou and his lawyer, Jorge Menezes, accused the Legislative Assembly (AL) and its main bodies of having overstepped a series of procedures, disregarding the Basic Law, the general law and the House Rules in order to suspend the lawmaker – elected by universal suffrage – on December 4, 2017.

According to The Macau Daily Times, in a document of 60-odd pages, the defence chronicles all the facts and procedures that led to the AL plenary session that voted in favor of the suspension of Sulu Sou – 28 votes for and four against.

The lawmaker contends that five decisions and deliberations made by the President, the board and the plenary of the AL “violated the rules of procedure and fundamental rights of the appellant.”

The appeal, read by the The Macau Daily Times, noted that, “It is not a request for the Court [of Second Instance] to replace the AL itself or even to appreciate the substance of the matter.” Instead it requests the court to “investigate and deliberate on the legality of the acts that supported and originated the Plenary Deliberation.”

Sulu Sou is appealing against the plenary deliberation of December 4 which decided for the suspension of his mandate. The defence accuses the legislative body of denying Sou his fundamental right to address the plenary and to vote on a matter of public interest, “without a previous deliberation from the same Plenary that there was a conflict of interests.”

The appellant says that, according to the law, only the plenary of the AL has the right to decide on this matter. In this case, the declaration of conflict was deliberated by the board of the AL in violation of the Statutory Rules.

The deliberation of the AL Board (Nov 21, 2017) which determined that the appellant lawmaker was in a situation of conflicting interests “lacks competence” and, therefore, results in “its own annulment and in the annulment of the Plenary Deliberation [which suspended Sou].”

Sou’s lawyer contends that the whole process suffers from “gross irregularities” and a deficient interpretation of the law, starting with the Committee of Rules and Mandates that led to unprecedented decisions by the AL and its president.

The AL President denied lawmaker Sulu Sou the right to defend himself, “saying he ceased to benefit from the said right,” invoking a conflict of interests.

“This is certainly a unique case in the history of the MSAR: an interested party could be the subject of an unfavourable decision without having the right to defend himself,” the appeal states.

In his appeal, Sulu Sou said he should have had the fundamental right to participate “autonomously” in the debate and the vote regarding the suspension of his mandate, because it was a case of public interest. “A fundamental right can only be restricted by law,” as per Article 40 of the Basic Law and the general law. The conflict of interest only applies in cases where there is a “personal interest” involved.

The various bodies of the AL that dealt with this case contend that Sou’s suspension is a matter of the personal sphere, hence he should not participate. If it was indeed a matter of the personal sphere, “there would be [a] conflict of interests, for example, if a lawmaker who owns a casino wanted to participate in a discussion about legislation of the casino industry,” the document reads.

For Sulu Sou, the “President of the AL violated a subjective fundamental, sacred right of Public Law, and was inconsiderate of the public interest of the citizens represented [by Sou], giving a repressive image of the legislative body of the MSAR… in the House where those rights should be upheld.”

The Legislative Assembly voted for the suspension of Sou’s mandate at the request of the Court of First Instance to lift his parliamentary immunity. He will stand trial next Tuesday for an alleged act of civil disobedience during a demonstration. Jorge Menezes is the defendant’s attorney.