A South African man was arrested at the local airport when he was trying to smuggle 4.5 kg of cocaine mixed with cotton padding in clothes packed in his hand luggage on Tuesday. 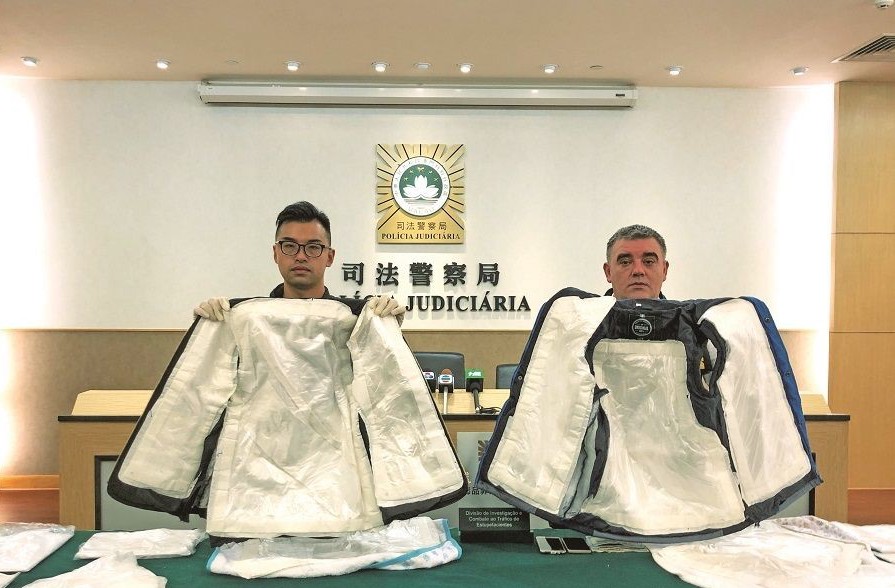 The Judiciary Police (PJ) arrested a South African man at the local airport when he was trying to smuggle 4.5 kg of cocaine mixed with cotton padding in clothes packed in his hand luggage on Tuesday, PJ spokesman Choi Ian Fai said during a special press conference on Wednesday.

The cocaine seized, which weighs 4.5 kilogrammes, has an estimated street value of 12 million patacas, Choi said.

According to Choi, the 47-year-old suspect is surnamed Van Vuuren. He told the police that he is a businessman.

The police were tipped off recently that a drug-trafficking suspect was going to try to smuggle drugs to Macau on a flight into the city.

On July 11, Van Vuuren initially took a plane from Brazil to Ethiopia. Then he flew to Manila and arrived in Macau at noon on Tuesday, according to Choi. The police believe that the suspect’s final drug-trafficking destination was Hong Kong, Choi added.

PJ officers stationed at the airport saw a passenger – Van Vuuren – arriving from Manila acting suspiciously and consequently intercepted him. Initially, no drugs were found on him.

However, police then checked the items in his hand luggage as they looked suspicious. There were about 10 items of winter clothing in the suitcase. Choi said that all the clothes were found to have been altered. Further investigation revealed that the cotton padding in the clothes contained 4.5 kilogrammes of cocaine – in an attempt to prevent the airport’s X-ray scanner from discovering the drugs, Choi said.

According to Choi, the cotton padding in the 10 items of clothing contained between 60 and 70 per cent cocaine. Police believe that after arriving in Macau, Van Vuuren planned to put the clothes into water and then dry them over flames to retrieve the cocaine, Choi added.

According to the Macau Post Daily, Choi pointed out that it was the first time that this kind of smuggling method has been detected by the police in Macau. He added that when being questioned by the police the suspect’s attitude was “fifty-fifty”.

Van Vuuren was transferred to the Public Prosecution Office (MP) on Wednesday for further questioning and possible arraignment on a drug-trafficking charge. He faces five to 15 years behind bars.