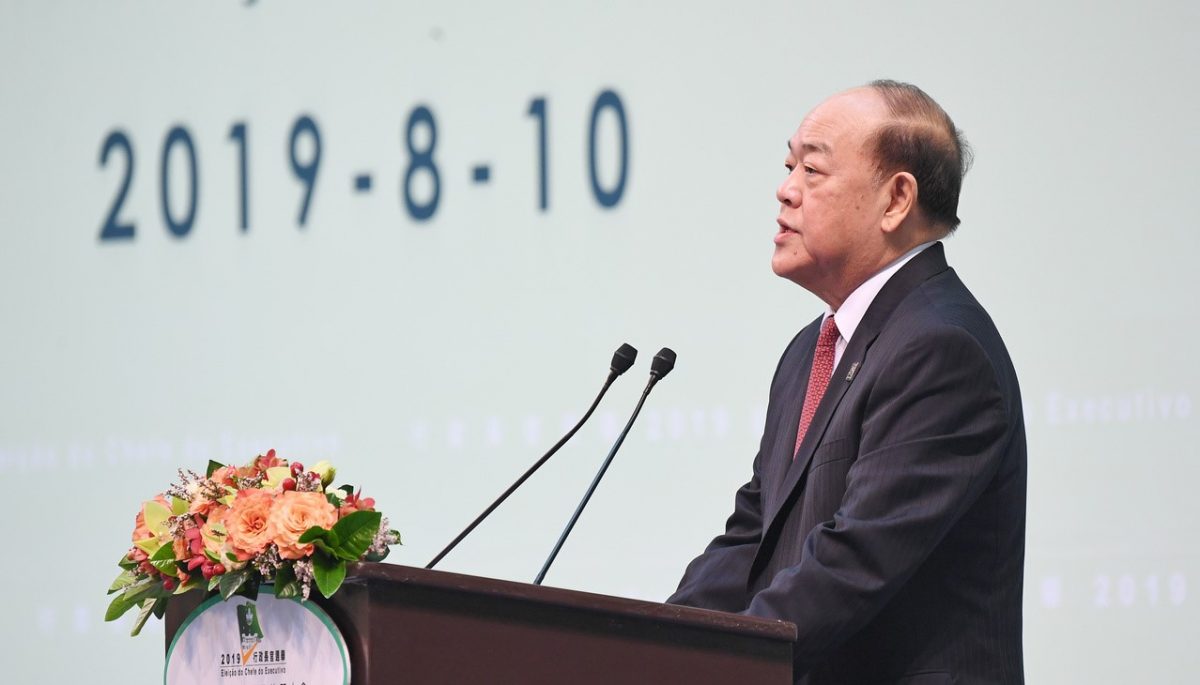 During a Q&A session with members of the Chief Executive Election Committee, chief executive candidate Ho Iat Seng said on Saturday that his government — if he succeeds in his election bid — will streamline Macau’s public administration system.

Saturday’s candidacy platform presentation-cum-Q&A session — which started at 10 a.m. and ended at 1 p.m. — at the Macau East Asian Games Dome in Cotai was, according to government-owned broadcaster TDM, attended by 248 of the 400-member Chief Executive Election Committee, from which Ho obtained 379 nominations.

Ho noted that the definition of a public servant in Macau is broader than in other countries and regions, as in Macau it also includes medical staff in public hospitals and teaching staff in the public education sector, adding that the number of Macau’s public servants stands at some 38,000.

Ho said that the Macau government has over 60 bureaus and other bureau-level entities, while the central government in Beijing has only 26 ministries that are “administering [a country with] a population of 1.4 billion”. Ho said the point in Macau is that some government entities might overlap each other, and certain overlapping functions and powers might exist in the public administration. Ho said that consequently, Macau’s public administration structure needed to be streamlined.

In Macau’s public administration system, bureaus and bureau-level entities are overseen by either one of the government’s five policy secretaries or directly by the chief executive.

“There are too many bureaus in Macau. One particular matter may need to pass through several bureaus before it can be completed, which slows down the process. The government will need to study whether to appropriately change the public administration structure,” Ho said.

Ho said that his future public administration reform drive would not only focus on streamlining procedures and limiting the number of public servants, but also on “devolving more powers” to lower-level entities and officials. Ho, 62, said that for certain matters, higher-level officials should devolve more powers to their subordinates. “Only after one has been given more powers, will he or she have more responsibilities,” Ho said, adding that the overlapping powers and responsibilities among different officials in Macau currently appear to confuse them.

Ho, a former speaker of the Legislative Assembly, urged Macau’s 38,000 public servants to join him in reforming the public administration “well”.

Ho, a former deputy to the National People’s Congress (NPC), also said that Macau ought to establish a formal system to train its public servants and set up a public servant training college in the long term.

Election Committee member He Haiming from the business sector asked about Ho’s plans to support the local meetings, incentives, conferences and exhibitions (MICE) sector in developing its business in other cities in the Guangdong-Hong Kong-Macau Greater Bay Area (GBA). Ho noted that while Macau’s available space for MICE events is large, most of the facilities are in casino resorts that, he said, charge relatively high fees. Ho said that consequently, the Macau government spends a lot of money on supporting local MICE activities. He said that the local MICE sector therefore needed to get its own facilities outside casino resorts. Ho said that it would be very costly if the local government needed to extend its support measures to other GBA cities in the future.

Ho, a veteran leader of Macau’s business community, noted that the local government has been spending a great deal of money on the city’s education, adding that, as an example, he had carried out a “rough calculation” showing that the local government, on average, spends 1.5 million patacas per resident on the cost of the city’s 15-year free education from kindergarten to high school plus tertiary education – the public University of Macau (UM).

According to media reports, while local students enrolled in local public tertiary educations have to pay tuition fees, the government covers most of the cost.

Ho noted that Macau currently has less than 6,000 newborns per year, adding that consequently there was room for his future government to further improve its education resources allocation. Ho said that local schools have been doing a lot in their patriotic education, adding that his future government planned to strengthen the concept of “love the country and love Macau” education, enabling young people to know more about the nation’s modern history, including the “miserable” war period and the period after the founding of the People’s Republic of China (PRC).

Election Committee member Lam Chong from the cultural sector asked how Ho’s future government would deepen people-to-people ties between Macau and Taiwan. Ho said that a recent incident in a neighbouring region – apparently referring to the ongoing protests and violence in Hong Kong – had caused an adverse impact on the “One Country, Two Systems” principle. Ho said that therefore Macau should implement the principle in a better way with the aim of allowing Taiwan to see the successful implementation of the principle in Macau. Ho pledged that his government will continue to strengthen exchanges between Taiwan and Macau in various aspects.

Several members of the committee asked Ho whether he would promise to keep the current government’s policy of banning the hiring of non-local casino dealers and commercial drivers. Ho replied that as a candidate he should not make such a promise. But he was quick to add there was a need for the future government to continue this policy.

Meanwhile, speaking at a press conference after the Q&A session, Ho said the government should be “conservative” as far as the possible setting-up of a sovereign wealth fund is concerned. He also said that now was possibly not the right time to set up such as fund because of the “complicated global investment climate”.

According to the Macau Post Daily, Ho made the remarks after asked by a reporter about the current government’s recent decision to ask the legislature to remove the debate of its bill on the establishment of the fund from the agenda. Lawmakers removed the item from the agenda on Wednesday.

Ho also told the press conference that the current situation in Hong Kong could adversely impact Macau’s economy in the second half of the year.