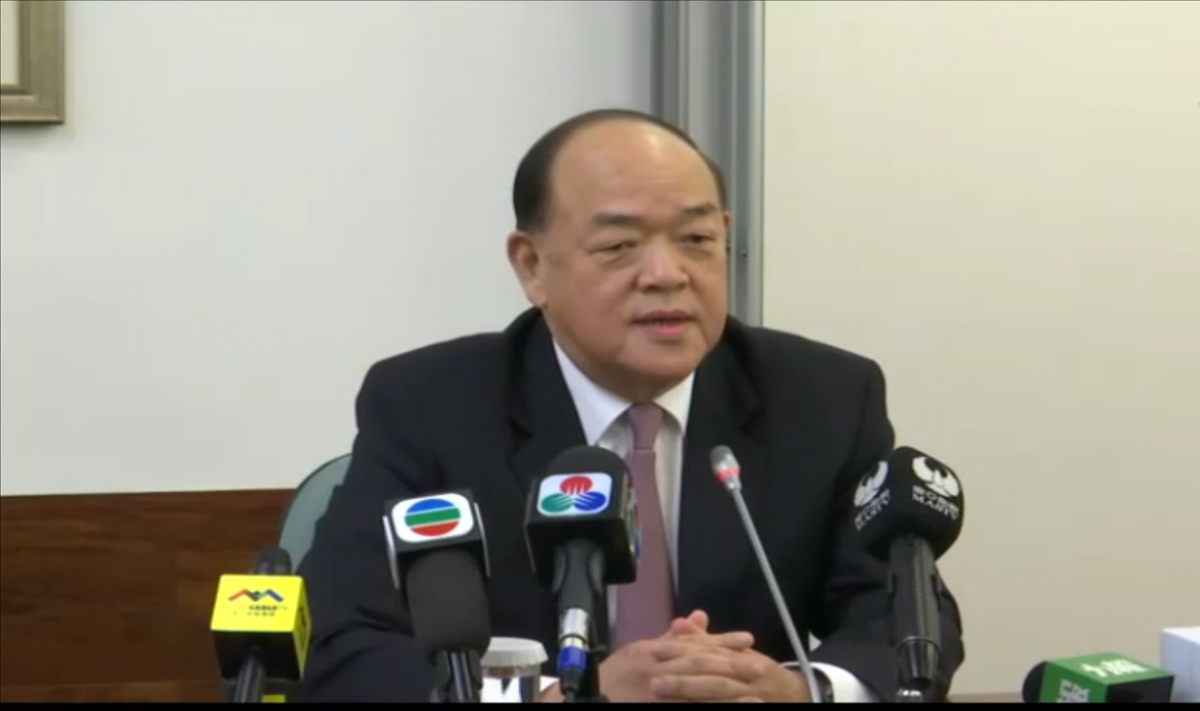 Legislative Assembly (AL) President Ho Iat Seng announced Thursday that he has decided to run in the chief executive election later this year as he wants to promote Macau’s economic diversification and its participation in the development of the Guangdong-Hong Kong-Macau Greater Bay Area (GBA) by making use of his experience in legislative tasks in both the nation’s top legislature and the local legislature.

Ho made the announcement during a press briefing in a meeting room of the Legislative Assembly after chairing a Q&A session in the legislature’s hemicycle during which Chief Executive Fernando Chui Sai On had answered questions from 30 lawmakers.

Ho, an indirectly-elected lawmaker representing the city’s business sector, is the sole Macau member of the elite Standing Committee of the National People’s Congress (NPC).

Ho’s intention to run for the city’s top job emerged earlier this year, when he told reporters on February 13 that he was “actively and prudently” considering running for chief executive.

After yesterday’s Q&A session, Ho convened the press briefing to announce “a decision about myself”.

At the beginning of the press briefing, Ho noted that he told reporters on the sidelines of the legislature’s Chinese New Year media luncheon on February 13 that he was “prudently” considering a bid to run for chief executive. Ho said yesterday that he has now “provisionally” decided to run in the chief executive election after “studying the matter with many friends”.

Ho noted that according to the Chief Executive Election Law, local NPC deputies are ex officio members of the 400-member Chief Executive Election Committee and as such are barred from being a chief executive candidate. Ho said that therefore he has applied to resign as a NPC deputy of the current 13th NPC. Ho said that his resignation still needed to be approved by the NPC Standing Committee so that “I can only say now that it is a provisional decision” to run for chief executive.

Ho noted that he will only be disqualified from being an ex officio member of the Chief Executive Election Committee after the NPC Standing Committee approves his resignation as a NPC deputy, adding that only then would he be legally qualified to become a chief executive candidate.

Ho said that the NPC Standing Committee in Beijing will convene a meeting from Saturday to Tuesday next week, adding that he “hopes that the NPC Standing Committee will approve my [resignation] application” during the upcoming meeting so that “I can carry out the relevant tasks in the next step” to launch his election campaign after returning to Macau from the meeting in the capital.

Macau’s current legislature has 33 members. There are 12 Macau deputies to the NPC, while there are 37 Macau members of the CPPCC National Committee.

When asked by the media why he has decided to run for chief executive even though he is required to resign as a NPC deputy in order to qualify as a chief executive candidate, Ho said that he has been an NPC Standing Committee member for about 19 years and a member of the Legislative Assembly for 10 years during which he has been serving first as its vice-president first and then as its speaker (president), adding that he has a “clear” understanding of the legal systems of both jurisdictions – the mainland and Macau.

Ho went on to say that Macau will need to have its legal system integrated with the nine GBA cities in Guangdong province in order for Macau to participate in the development of the GBA so that the special administrative region will be able to achieve further development and have more geographical “space” for Macau’s continued development.

Ho said that Macau is small place so that “Macau people, including me, have been puzzled as to how to further develop the city”.

Ho said that people in his generation have been witnessing the country’s reform and opening-up, adding that the GBA scheme is a “very big” opportunity for Macau. Ho said that “many friends” hope that he can make good use of his multiyear experience in legislative tasks in both the mainland and Macau so that Macau will be able to have its legal system better integrated with the mainland’s, which he said would lay a better foundation for Macau to expand its “space” for its continued development. Ho said that therefore he has decided to run for the city’s top job.

Ho was a member of the Executive Council – the local government’s top advisory body – from 2004 to 2009.

Meanwhile, a reporter asked Ho during the briefing about the comment made by a policy secretary earlier this year that Macau’s chief executive needed to have work experience in the public administration.

The reporter did not mention the policy secretary’s name.

According to previous media reports, it was Secretary for Economy and Finance Lionel Leong Vai Tac who made the comment. Leong has hinted that he was interested in running for chief executive.

When the reporter asked Ho about his view on the comment that appeared to refer to him, Ho replied that “[you] cannot say something like this. I think everyone says something in line with their own ideas.”

Ho said that the more important thing for a chief executive is to form a good government team as “it is impossible for one person to finish all the many tasks”. ‘Macau has some 35,000 public servants and making good use of public servants is the best option for governance,” Ho said.

Ho said that he has not yet started to form an election campaign team and has still to work on his campaign platform.

Ho also said that only after the NPC decision on the request for resignation would he decide whether he would resign from the local legislature or merely suspend his seat.

Ho also said that he could not attend next Tuesday’s plenary session which will discuss and vote on a bill by non-establishment lawmaker Sulu Sou Ka Hou.

The bill proposes that a chief executive election would be required to have at least two candidates.

Speaking to reporters earlier this week, Sou urged Ho to excuse himself from Tuesday’s session because of alleged conflict of interest. Ho said yesterday that as he will attend an NPC Standing Committee meeting in Beijing on that day he could not chair the plenum of the local legislature.

According to recent media reports, Ho is of the opinion that the bill is violating the Macau Basic Law according to which only the government can propose legal changes to Macau’s political system.(Macaunews)

Chui to present budget bill to lawmakers next month