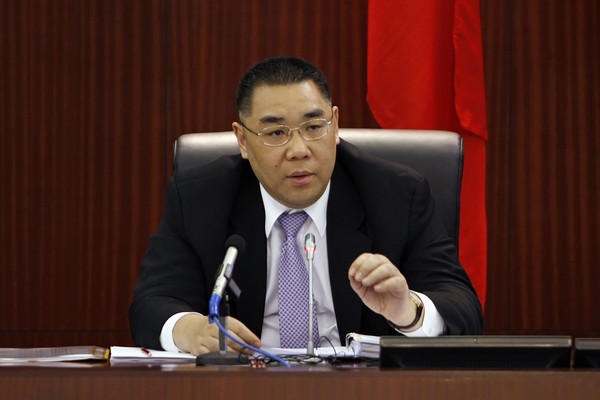 The findings from a poll carried out by the Public Opinion Programme of Hong Kong University (POPHKU) show that the popularity of Chief Executive Fernando Chui Sai has suffered a “significant” decline, with residents’ support rating at 61.1 out of 100, a 3.4 point decrease on last year’s survey to measure Chui’s popularity rating.

POPHKU, which is headed by well-known academic Robert Chung Ting-yiu, released the findings of the poll on its website on Thursday, which also showed that Chui’s “net popularity plunged to zero.”

According to the survey cited by The Macau Post Daily, respondents were asked to evaluate Chui’s support rating from zero to 100.

A total of 511 locals aged 18 or above were surveyed by POPHKU on the phone from December 6-12.

According to the results, 39 percent supported Chui as chief executive while 39 percent did not, thus Chui’s net approval rating(“net popularity”) is zero.

The survey also found that Macau people generally gave a positive appraisal of the city’s overall development with the net satisfaction rate being 50 percent while 66 percent said that they lived a happy life, giving a “net happiness of positive 59 percentage points.”

“This shows that not only are people satisfied with Macau’s development, they lived a happy life and are optimistic about the future,” the survey concluded. However, it also pointed out that “looking ahead, housing is considered the most important problem to be tackled by the government in the coming year.”

Meanwhile, Central People’s Government Liaison Office Director Bai Zhijian – Beijing’s top representative in Macau – said  in  Beijing in a statement on the 14th anniversary of the establishment of the Macau Special Administrative Region (MSAR) that the local government should spend each avo (cent) wisely.

Bai, who is widely expected to be succeeded as head of the office by his deputy Li Gang at the end of this year, also urged the local government to treasure its resources and use them as foundations for the future of Macau, according to the statement, pointing out that the government should continue to diversify the local economy and strengthen its effort to develop non-gaming tourism industries, such as conventions and exhibitions, cultural and creative industries, and traditional Chinese medicine (TCM).