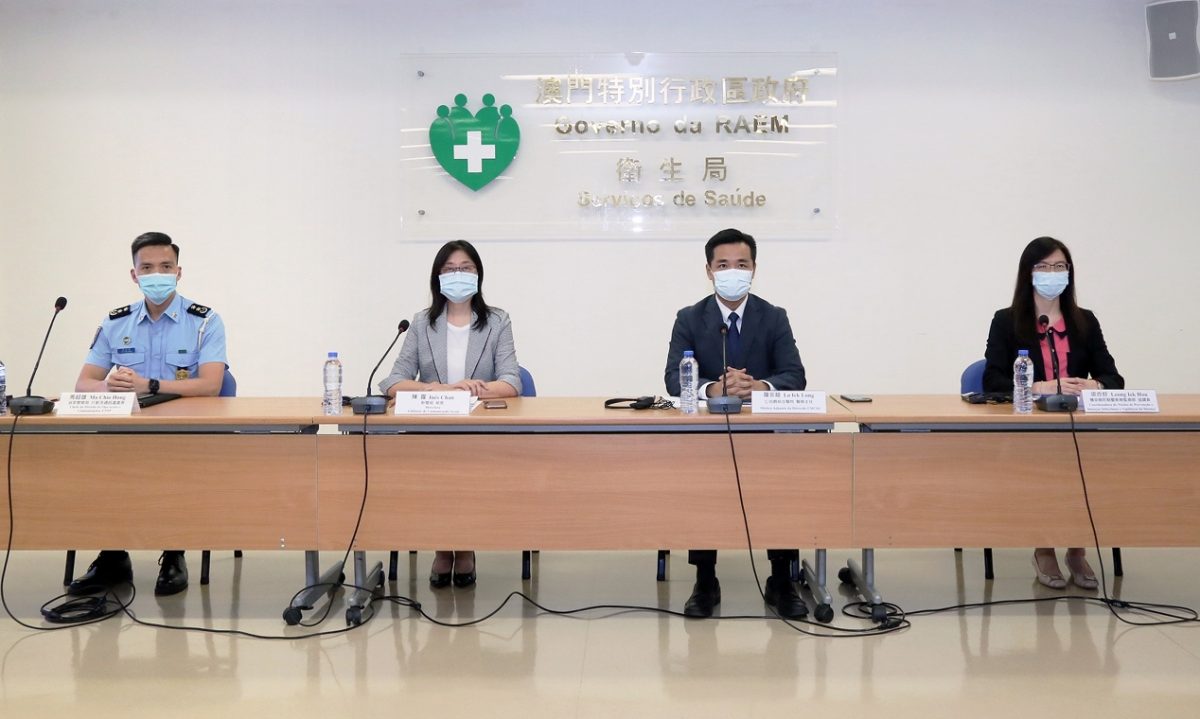 Macau imposes quarantine on arrivals from all foreign countries (Update)

All you need to know about the coronavirus in Macau

The Macao government said on Tuesday it believes that today’s lifting of Guangdong’s 14-day quarantine requirement for all arrivals from Macao will not cause the COVID-19 epidemic in the two regions to rebound.

The Macao government on Tuesday also urged local residents to refrain initially from visiting Guangdong unless necessary as the new measure has just started.

Alvis Lo Iek Long, a clinical director of the public Conde de São Januário Hospital Centre, made the remarks during a special press conference on Tuesday evening about further details of the Guangdong government’s quarantine lifting, which was announced by the Macao government’s Novel Coronavirus Response and Coordination Centre on Monday night.

According to Monday’s announcement, the new measure, which started at 6 am today, is applicable to all arrivals from Macao, except confirmed or suspected COVID-19 patients, those who have been in close contact with confirmed COVID-19 patients, those with a fever or any respiratory symptoms, and those who have been to a foreign country, Hong Kong or Taiwan within the 14 days prior to their intended entry into Guangdong.

According to Monday’s announcement, those who have entered Guangdong from Macao can only travel within the nine Greater Bay Area (GBA) cities in the province, namely Dongguan, Foshan, Guangzhou, Huizhou, Jiangmen, Shenzhen, Zhaoqing, Zhongshan and Zhuhai, while Macao residents who work or live in Guangdong and mainlanders who have returned to the province from Macao can travel throughout the whole province.

The Novel Coronavirus Response and Coordination Centre also announced on Monday night that the Macao government will toughen its COVID-19 prevention and control measures for local casinos from 00:00 today – coinciding with “the new entry and exit measures” between Guangdong and Macao – according to which all gamblers and guests entering casinos premises must undergo a temperature check and show their green Macao Health Code and a nucleic acid test (NAT) certificate confirming that they have tested negative for COVID-19.

During Tuesday’s press conference, Lo said that for the time being it was difficult for the local government to estimate to what extent the new entry and exit measures between Guangdong and Macao and the new COVID-19 prevention and control measures in casinos will raise the number of visitors to Macao. “Any new measures to restore the movement of people [between Macao and the mainland], including for visitors, have always been rolled out in a gradual way. If the new measure [the Guangdong government’s quarantine lifting for arrivals from Macao] proceeds smoothly, it will neither cause the [COVID-19] epidemic [in the two regions] to rebound nor will it adversely affect their COVID-19 prevention and control work,” Lo said.

Lo reaffirmed on Tuesday that only those who can present their Guangdong Health Code, which is converted from the Macao Health Code and a valid NAT certificate confirming that they have tested negative for COVID-19 within the past seven days, are allowed to enter Guangdong from Macao.

Lo also reaffirmed that the Guangdong government’s quarantine lifting for arrivals from Macao is only applicable to Macao residents and mainland visitors, while non-resident workers from the mainland are still subject to the current quarantine rules.

Since last month, non-resident workers from the mainland employed in Macau and living in Zhuhai have been exempted from the 14-day quarantine between Macao and Zhuhai so that they can commute between the two cities.

Since 20 February, non-resident workers who have been in the mainland within the 14 days prior to their intended entry into Macao have had to go into quarantine and medical observation for 14 days at a facility in Zhuhai arranged by the health authorities there and then obtain a health certificate issued by the Zhuhai health authorities confirming that they have not been infected with the novel coronavirus, before they are allowed to enter Macao. Foreign non-resident workers are currently barred from entering Macau.

Lo also reaffirmed on Tuesday that all those arriving in Macao from Hong Kong, including Macao residents, must present a NAT certificate confirming that they have tested negative for COVID-19 within the past seven days, after which they must undergo 14 days of quarantine and medical observation at one of the government’s “quarantine hotels”, during which they have to undergo two nucleic acid tests. “They are not allowed to enter the mainland from Macao within the 14 days after entering Macao,” Lo said.

Government Information Bureau (GCS) Director Inês Chan Lou said during Tuesday’s press conference that the local government does not expect a large number of mainland visitors to Macao in a short period of time after today’s implementation of the Guangdong government’s quarantine lifting, pledging that it will constantly assess the changes in the number of mainland visitors to Macao.

Early this year, the central government suspended the issuing of individual visit scheme and package tour permits for mainlanders’ travel to Hong Kong and Macao.