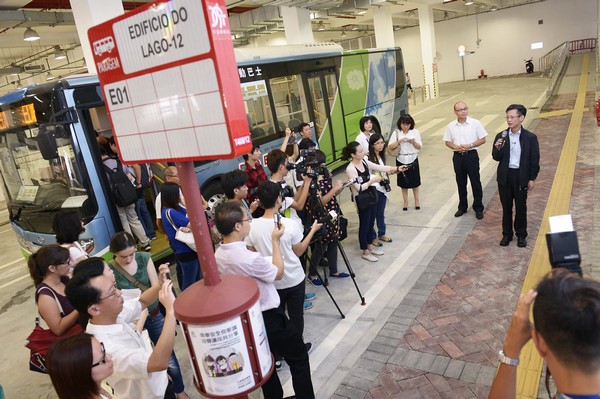 The government has launched a three-month trial run of the city’s first electric bus, during which all journeys will be free of charge for passengers.

Lo Seng Chi, who heads the Transport Bureau’s Traffic Management Department, said the government had to pay about 990,000 patacas to lease the e-bus from the Shenzhen-based manufacturer for the three-month trial.

Lo made the remarks to reporters at the bus terminal under Lakeside Building in Taipa Thursday, as the bureau had arranged for the media to experience a ride on the bus.

Lo said that the trial would last for three months and during that period passengers are welcome to fill in a questionnaire regarding the electric bus experience.

Lo also said that the bureau needed to evaluate the feedback they collected from the passengers and technical data in the first phase before planning the second phase, which will see electric buses on routes in the old district of the city.

However, Lo said that there was no timetable for the second phase to start.

According to the bureau, the trial route will run between Taipa and Coloane.
Talking to reporters, Chiang Cheok Sang, maintenance technical director of bus operator TCM, pointed out that the bus can travel 150 to 200 kilometres on a full battery, which takes five hours to fully charge.

He said the bus had a larger horse power than the company’s diesel buses, although the electric bus will stall if the battery overheats.(macaunews)