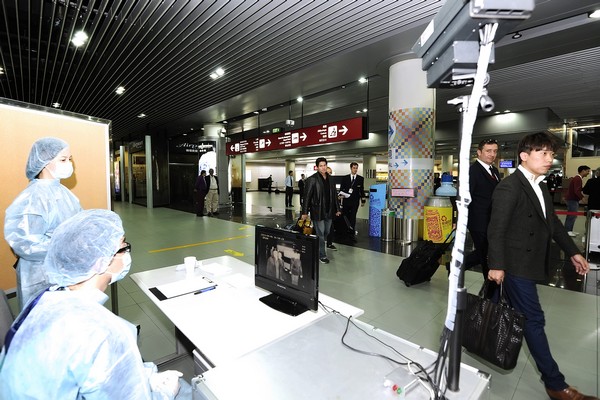 No suspected cases of H7N9 virus have been discovered by the airport’s infra-red thermography equipment since Saturday afternoon when the government installed the system to detect elevated body temperatures of visitors from the mainland’s eastern provinces when they arrive in Macau.

The Health Bureau (SSM) also said in a statement that since the cases in the mainland show the virus is transmitted from birds or other animals to humans, residents should avoid touching any live or dead animals and avoid eating poultry that weresick or have died from an illness.

SSM Director Lei Chin Ion said during a press briefing at the airport on Saturday when the infra-red thermography equipment was set up that since Macau was relatively close to the mainland’s eastern provinces, people travel to either side quite frequently and so “we can’t rule out the possibility that there will be imported cases of the H7N9 virus.”

Lei also urged the public not to spread rumours about the virus through text messages, adding that depending on how the situation develops the bureau would set up the thermograph system at other border checkpoints when necessary.

According to The Macau Post Daily, Lei also said that after tackling SARS and other flu viruses over the past decade the bureau had accumulated ample experience and acquired a comprehensive array of medical equipment to tackle the new virus.

According to Lei, the bureau has 1.85 million capsules of Tamiflu and 250,000 doses of Relenza in stock, corresponding to 197,000 individual dosages.

According to the bureau, it has 4,300 N95 respirators and 2.92 million medical masks, enough to supply local hospitals and clinics for three months, Lei said. In addition, the bureau has 100,000 disposable protection suits, 59,000 overalls and 2.9 million pairs of gloves enough for Macau to use for a year.

Lei said that the bureau also had 381 infra-red thermography devices and 44 quarantine beds with mechanical ventilators.

“The bureau is prepared for the new virus but residents too must avoid touching live and dead animals and pay attention to personal hygiene,” Lei stressed.

Civic and Municipal Affairs Bureau (IACM) Administrative Committee member Ng Peng In told reporters on a separate occasion on Saturday that IACM officials will soon meet officials and experts from Beijing, Hong Kong, Shenzhen and Zhuhai to discuss whether it will be necessary to step up inspections of imported fresh produce and poultry.

According to Ng, fresh produce and poultry available in the city’s markets are not from Shanghai and the pigeons that have been found to carry the H7N9 virus in Shanghai are not supplied to Macau as local supply is imported from Zhongshan and Zhuhai. Ng added that all live poultry imported to Macau go through a thorough inspection.

Meanwhile, Chief Executive Fernando Chui Sai On said in a statement Sunday that the local government regards the protection of Macau people’s “life and health” as its top priority when tackling the H7N9 menace.

According to the statement, the chief executive has ordered Secretary for Social Affairs and Culture Cheong U to co-ordinate the fight against the potentially fatal virus.

Chui is in Hainan where he attends the Boao Forum for Asia (BFA) Annual Conference 2013 in Boao that ends today.(macaunews)

2020 Macao International Marathon to go ahead on 6 December

Kou Hoi In set to be new president of Legislative Assembly