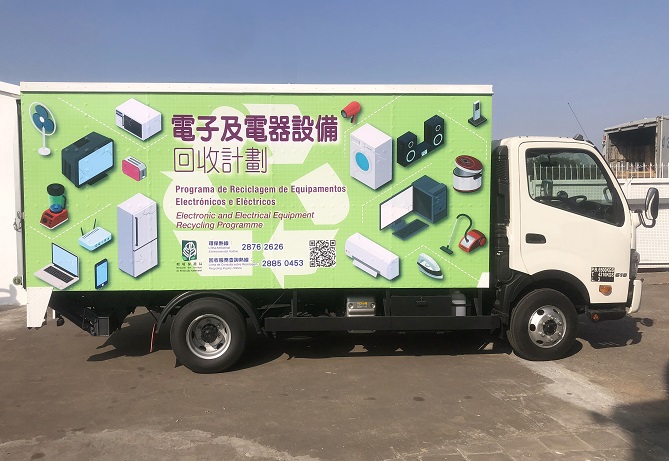 The Environmental Protection Bureau (DSPA) has announced that it will launch a scheme for the recycling of ICT (information and communications technology) products and electrical appliances on Wednesday — New Year’s Day.

A press conference about the scheme was held on Friday at the CEM Headquarters in Estrada de D. Maria II.

The bureau launched a pilot scheme for the recycling of ICT products in October 2017, which has now been extended to also cover household appliances.

According to the bureau’s website, the upgraded scheme will cover all types of household appliances, such as fridges, air conditioners, washing machines, dishwashers, dehumidifiers, radiators and all other types of space heaters, vacuum cleaners, rice cookers, fans, microwave ovens, conventional ovens, electric kettles, induction cookers, irons, toasters and hairdryers among others.

Addressing the press conference, Chan Kwok Ho, who heads the DSPA Environmental Infrastructures Management Centre, said that if the collected ICT items and home appliances meet certain specifications required by his bureau, they will be donated to local charities; otherwise, they will be dismantled by the scheme’s contractor. After dismantling them, materials that can be recycled will be separated, Chan said.

According to Chan, his bureau will ensure that all data on the hard disk of a computer has been deleted before being donated.

Residents can leave their used ICT products and household appliances at a number of fixed collection points during their opening hours, and the bureau’s mobile collection vehicles, which will be parked at different locations across the city at designated times.

According to the bureau’s website, the fixed collection points will include the bureau’s premises at the CEM headquarters, its two service points in Ilha Verde and at Coloane’s Seac Pai Van public housing estate, eight service centres run by the Municipal Affairs Bureau (IAM) across the city, and two service centres run by the Macau General Union of Neighbourhood Associations (commonly known as Kai Fong) near the Ruins of St Paul’s and at Nova Taipa Gardens.

Two mobile collection vehicles will be parked at designated times at 16 locations on the peninsula and Taipa, according to the bureau’s website.

However, residents can only leave larger appliances at three collection points, namely the central collection point of the city’s automatic rubbish collection system in Areia Preta, the office of the scheme’s contractor Vannex International Limited – a Hong Kong company – in Pac On in Taipa, and the Coloane Wastewater Treatment Plant, according to the bureau’s website, which defines large appliances as fridges, air conditioners, washing machines, and televisions.

Residents, schools, non-profit organisations and government entities can use door-to-door collection services for the recycling of large appliances free of charge, Chan said. They can contact the scheme’s contractor for the door-to-door collection service.
Since the launch of the recycling scheme of ICT products on October 9, 2017 up until November 30 this year, the bureau had collected 8,501 desktops, 2,744 laptops, 6,207 LCD/LED and CRT monitors, 2,745 printers, 385 scanners, 549 tablets, 2,489 mobile phones, 2,584 landline phones, and 47,616 various other ICT items, according to the bureau’s website.

According to the Macau Post Daily, the collected used ICT products weighed a total of 217,879 kilogrammes, 206,588 kilogrammes of which could be recycled after the dismantling processes. Finally 140 computer sets – including monitor, keyboard and mouse device – were donated to charities during the period, according to the bureau’s website.