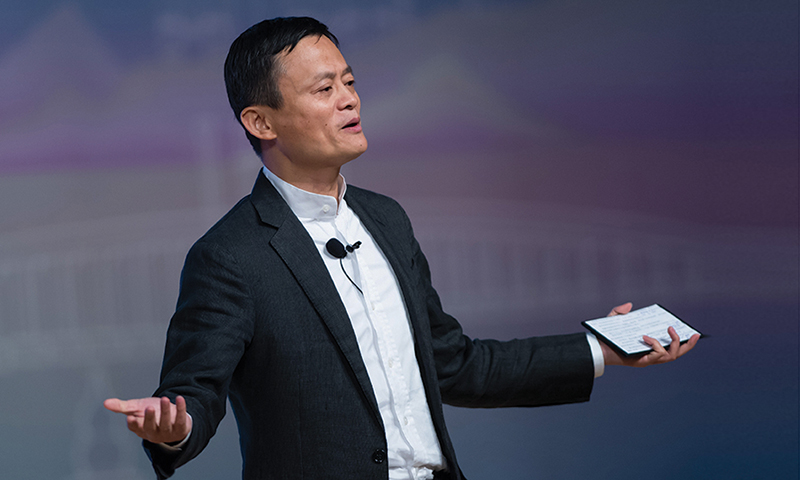 Jack Ma, the founder of Internet giant Alibaba told young people that they should make use of the World Wide Web and Big Data to turn Macao into an ‘intelligent city’, with advanced Internet and finance companies.

Jack Ma Yun was delivering a lecture on 6th June at the University of Macau. He was visiting the SAR as chairman of the Zhejiang General Business Association; it was hosting its inauguration ceremony in the city.

He met Chief Executive Chui Sai On, who invited him to be consultant to two committees in the SAR – Economic Development and Science and Technology. Ma accepted both posts. Also attending the meeting were Lionel Leong Vai Tak, Secretary for Economy and Finance; Raimundo do Rosário, Secretary for Transport and Public Works; and Ho Iat Seng, President of the Legislative Assembly.

Ma, 51, is the richest man in Asia, according to the Bloomberg Billionaires’ Index in April. It estimated his wealth at US$33.3 billion, ahead of Wang Jianlin, chairman of the Wanda Group, with US$32.7 billion and Li Ka-shing, chairman of Cheung Kong, with US$29.5 billion.

His wealth and success as an entrepreneur attracted a full house of enthusiastic students to the lecture hall at the university.

He is a legendary figure among young Chinese; they all know his story, from humble beginnings to fabulous wealth and a listing of Alibaba on the New York stock market for US$25 billion in 2014.

A native of Hangzhou, capital of Zhejiang province, he failed the college entrance three times before getting into the city’s Normal University. After graduation, he applied for 30 different jobs and was rejected by all of them, even KFC. He became a teacher of English. In 1995, with his wife and a friend, he founded an Internet company but did not buy his own computer until 1997. He was one of the pioneers of the Internet in China.

“Macao should establish a new type of financial system, instead of building an ordinary one,” Ma told the students. “I expect the global financial system to undergo earth-shaking changes in the next 30 years. Internet finance will definitely be the future trend.”

He said that there was nowhere in the world like Macao that enjoyed the advantages of the ‘One Country, Two Systems’ policy. “Opportunities are everywhere, especially with Macao’s geographic location linking China and Portuguese-speaking countries and everyone has the chance to succeed as we are all living in the Internet age.”

“The characteristics of Hong Kong and Macao are their openness and willingness to accept things from elsewhere,” he said.

Ma’s comments are good news for government officials and members of public alike. Everyone is searching for new engines of economic growth, after gaming revenue fell in May this year for the 24th month in a row. Analysts believe this will be the ‘new normal’ and that the revenue will not return to the record levels it achieved three-four years ago.

So the city must find new attractions for tourists outside the casinos and develop new industries and services.

Ma was the ideal speaker on this subject. In April 1999 he founded Alibaba, which this year overtook WalMart to become the world’s largest retail platform.

In April, Alibaba’s retail marketplace platforms surpassed US$476 billion in Gross Market Value (GMV). Its online trading accounts for 10 per cent of all retailing in China and supports 15 million jobs, it said. It aims to double its GMV by 2020 from the current level.

Alibaba has also been a pioneer in Internet finance, with Alipay, a payment platform, and Yuebao, an investment platform. Both have tens of millions of users in the mainland, both individual and corporate; they have attracted billions in yuan away from the traditional banks and enabled their customers to conduct business online, without cash.

The knowledge of service and ability of Macao people are very strong. They have an attitude of openness toward new things. The 650,000 people of Macao are like a village; their greatest opportunity today is in small and medium-size enterprises.”

“If they use the Internet and Big Data to turn Macao into a digital city, this will make Macao very competitive in the future. I often hear people say that Macao has no resources. So even more this requires constant exploration and innovation. I am optimistic about Macao’s modernised service industry and the future development of its financial industry,” he said.

“The new technical revolution and the Internet revolution are very strong signals. The manufacturing sector is changing into the modernised service sector. In the future, all manufacturing will become modernised services. The greatest opportunity for Macao lies in its small and medium-size enterprises (SMEs). They have a strong sense of service. If they use the Internet and Big Data, then Macao will become an ‘intelligent city’,” he said.

“The Internet era gives an opportunity to everyone. The IT era is an opportunity for wealthy people and those with Internet skills are in demand everywhere. So I am optimistic about the future of Macao’s modern service sector and its development as an ‘intelligent city’ and its financial sector,” he said.

He stressed the remarkable changes in the financial sector. “The changes in finance today are the fastest in the last three hundred years. In the past, it consisted of serving 20 per cent of customers to earn 80 per cent of the money. Now you need to serve 80 per cent of customers. Over the next 20 to 30 years, this sector will have earth-shaking changes. In the past, it relied on trust and connections with people you knew. Now the most important thing is data. Macao has many opportunities; payment via the Internet is a part of life. The financial sector of Macao should build up a new kind of Internet finance.”

His two firms, Alipay and Yuebao, have revolutionised finance in the mainland; they are posing an enormous challenge to the traditional banks. Young people have eagerly adopted them as ways to make payments, keep money and make investments.

Ma encouraged students to meet more people and welcomed the young and innovators from Macao to work as interns in Alibaba and leading Zhejiang firms.

He also encouraged them to go to the mainland more often. “There are so many opportunities (there). If you only look at Macao, you will only be able to do things in Macao. I hope every one of you will see more and go to more places. Macao is good, while the world is also wonderful,” he said.

One student in the audience, named Li, said that, after hearing Ma’s talk, he felt full of confidence in the future of Macao. “In his encouragement to young people, I realised that Macao must not only rely on the development of the gaming industry. We must seize the opportunities in the service sector, science and technology and the Internet to create a new universe.”

In his meeting with the Chief Executive, Ma said: “I am full of confidence in the development of young people. The young people of today understand how to take the opportunities they have created themselves. The new wave of globalisation is young people. Small and medium—size enterprises (SME) are global and Macao has very many opportunities for development.”

“It has the advantage of developing Portuguese-speaking countries, of its young people and of its SMEs. Through the Internet and creative new science and technology, they can participate in global competition,” he said.

A commentary in the Macao Daily on 8th June said that the opportunities which Ma outlined in his speech for SMEs and the diversification of the service sector would not fall from heaven but would have to be found and developed.

“Over the last years, scholars have made a diagnosis and pointed the road for the future, but the results have been disappointing. For what reason? Perhaps the difficulty was too great, the appropriate conditions did not exist and the right moment had not come. More important is that Macao society has not extended all its energy and prepared.”

It said that the ‘ten golden years’ of Macao’s economic take-off had not been so much the result of its people’s great effort but more a result of policies from above and an inflow of capital that followed them. “The future development and transformation depends on Macao people themselves considering well,” the commentatory said.

They must use their own means to devise the path they wish to take and one which can be maintained.

In his speech, Ma also sought to inspire the students with his own story from a humble beginning to the richest man in Asia.

“I am not a hero, I am only an ordinary person.” He said that he had been through many times of confusion and losing face. “I did not study computers, management or finance. I worked six years as a teacher… I never thought of how to make money. I only hoped that what I invented would be useful.”

“Our employees have grown up after entering our company. They are not parts and components in the firm but friends. We respect and trust each other.”

“Complaining is a very fearful thing. Talented people can see opportunities in complaints; opportunities are something they discover and create. They come out of mistakes and difficulties. The market is like a battlefield. You must see yourself clearly and see the environment, the future and the opportunities.”

Veteran photographer captures the many faces of Macau