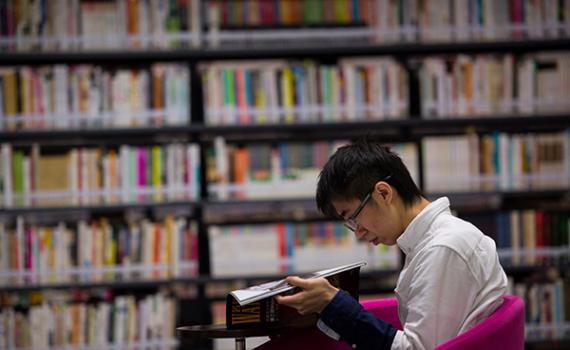 From 2016, all 16 libraries have been put under the management of the Cultural Affairs Bureau, under the name ‘Macao Public Library’. Changes in the opening hours and other adjustments are expected throughout the year.

For the libraries of Macao, 2015 was an important year – it marked the 120th anniversary of Macao Central Library and was the last year the Civic and Municipal Affairs Bureau was in charge of the seven existing libraries. As from 2016, all 16 venues have been put under the management of the Cultural Affairs Bureau, under the name ‘Macao Public Library’. Changes in the opening hours and other adjustments are expected throughout the year.

At 9:45 a.m., people wait in line in front of the main gate of the Sir Robert Ho Tung Library. Most are elderly, but there are some young people. Once the clock strikes 10:00, the doors open and people walk through the green scenery, turn towards the stairs and enter an indoor room in search of newspapers.

According to the latest official figures in 2015, of the seven libraries previously managed by IACM, the most popular one was the Wong Ieng Kuan Library in Areia Preta – up to November, it had received 176,846 visitors during the year. As far as the former Macao Central Library is concerned, up until December, it had received 1,431,118 visitors.

One of the most popular is the Sir Robert Ho Tung library, named after a Hong Kong merchant. Upon his death, he left his summer house to the local government as well as HK$25,000 to be used to buy books, with the aim of setting up a public library. In 1958, it opened to the public.

The library collection focuses on old books. It includes 5,000 ancient Chinese books, along with 79,924 more recent volumes that cover Literature, History, Philosophy, Art and Architecture. It also has 4,925 multimedia materials, as well as 72 newspapers and 732 magazines.

There is a bucolic feel to the Sir Robert Ho Tung Library, with the venue surrounded by plants and water fountains and running water in the background. In the middle of Praça de Santo Agostinho, once you pass the main entrance, there is an outdoor area, with a series of tables surrounded by green vegetation, welcoming those who are looking for a more relaxed place.

Sitting in a room at the Sir Robert Ho Tung Library was Tang Mei Lin, chief of the new Department of Management of Public Libraries – former Director of the Macau Central Library. Tang said this was the preferred location for those that live or work nearby or those interested in cultural affairs. “Students who are nearby come here or middle-aged people during weekdays. During lunch time, people working nearby come here too. At the weekends, young people who have an interest in culture come,” she said, emphasising that it is one of the favourite venues of local people due to the historical feel. “Tourists come here as well.” At the weekends, people mostly go to the Sir Robert Ho Tung Library looking for the outdoor area and for the cultural events. “We organise a lot here, since we have here more space for that.”

Most people go to the Macao Central Library in Tap Seac and the Taipa Library, due to “convenient transportation,” she said: “families with children and foreigners work in Taipa, so there are more expats there.” There is also the IACM Building Library, to which people go if they are looking for old books and newspapers. “You go there for past news and history of Macau, and it also has more rare western books.”

Due to the number and diversity of books and newspapers, along with its central location, the Macao Central Library in Tap Seac is the preferred venue. “It doesn’t have the biggest area, but it is the one with more books,” she said. “There are hundreds of types of newspapers/magazines there. People also go there to read books, but most of them will borrow to read at home,” she said. Those who are also doing research might find this venue the most suitable for their purposes. “There is a room on the ground floor, in which people can access older Macao documents with the help of staff.”

Macao Central Library is located in the middle of Tap Seac square. Built at the beginning of the 20th century, the building is one of the best examples of neo-classical architecture, together with the other buildings close to it.

The library collection holds 120,161 books, including 34,263 documents. It is very varied – it includes books about new technologies and information technology and documentation on Macao and the Portuguese presence in the East. It has 132 newspapers and 923 magazines.

On the ground floor, you can see a multi-media room with computers that are free to use, as well as a private room where you can research information on Macao. In the corridor, there is a big collection of DVDs and CDs, available to be borrowed and taken home. There is also a small room dedicated to children, where they can go with their parents for story-telling over the weekends.

On the second floor, you have the main room, where most people are seated. More secluded is a closed balcony with a few tables facing the square, separated through a glass window, in which people can read more comfortably. “There are hundreds of types of newspapers, from mainland China, Hong Kong, Vietnam, Japan and Thailand,” said a member of the library staff. “People come here every day to read the newspapers, even on the weekends. It’s always full, usually with older people.”

Sitting in the main room, with around 50 strangers, Carmen, 28, is one of them. “I work part-time, so I have some free time,” she said, explaining that the venue appealed to her mostly due to the “lighting and the decoration.” And the variety of newspapers is much more than at home.

Youngsters also come after school to do homework, as there are three schools in the neighbourhood. If you pass by the main room and turn right, you will see more inner rooms, where mostly young people gather. Here are the Macao collections, in English, Portuguese and Chinese. Queenie, 16, comes here to study one to two days per week. “It’s close to my home,” she said: “it’s quiet and easier to concentrate at the library.”

There are other types of readers. Sérgio, a Portuguese man, said he came every day since his retirement because he likes to research and read about Macao. “I read some books here and some newspapers. Living nearby, it’s convenient for me.”

Located in the middle of Camões Garden, Wong Ieng Kuan library is one of the most relaxing venues in the city. Named after a local merchant who contributed with donations for its creation, the library opened in 1999. It has 25,000 books and about 80 seats.

When you arrive, you pass the elderly doing tai chi exercises or dancing, and step into the venue. Once inside, at 10:00 a.m., you see already people sitting and reading newspapers.

“Every day I come to the garden and step inside to read,” said Ms Lin, a 60-year old woman, wearing glasses and reading a newspaper. “I used to live nearby. In the meantime, I moved, but now I got used to coming here.” She comes for the exercises, around 6:00 or 7:00, and enters, once the library opens. “I read all kinds of newspapers, especially about Macao.” Retired, Ms Leung – not her real name – also reads history books, since she is particularly interested in this topic. Before retiring, she came here for 20 years, every time she was on leave.

Looking about the room, you see around 20 people, all sitting down and going through the newspapers. Aged 37, a fireman is also sitting there. “I usually go to the Taipa Library, as I live nearby. I was passing by here, so I stepped in.”

In Taipa, he goes two days per week to read the newspapers when he has time off. “The library is quiet and comfortable and there are more kinds of newspapers and books.” His wife and daughter also go with him when they can. “She [daughter] likes to play and read cartoon pictures.”

The second floor is dedicated to children. Since it is morning and a weekday, you don’t see many of them children around. “In the afternoon, you have more children,” said Helena Chan, one of the staff members at the library. “Usually, the elderly come here after exercise to read the newspaper.”

Libraries located in parks, gardens or close to municipal facilities were, up to the 1st of January, under IACM’s umbrella. “Here, the focus was on parents and children, because the library is in a garden,” said the former coordinator of IACM libraries, Wong Keng Ngo, in an interview, at Wong Ieng Kuan Library in Sun Yat Sen Park.

Looking at the libraries that were under the IACM umbrella in 2015, Ms Wong said that maybe Ho Yin Library in Taipa was a bit different. “Since many people work in that area, in the afternoon during the week, you see a lot of young people taking a break.” The biggest one is in the São Lourenço market, but the children’s favourite is in Areia Preta. “The children’s library is very busy and they queue, especially in summer time,” she said.

The typical library user is elderly, probably retired, she said. In the summer time, since it is very hot outside, people take refuge in the city’s libraries, looking for newspapers and the Internet. Different libraries have different publications. “For instance, Wong Ieng Kuan in Sun Yat Sen Park has more plants and children’s books. At the market [São Lourenço], you have more Macao history or Macao publications. In Camões Park, it’s more health- related books.”

According to a statement sent by the Cultural Affairs Bureau, there are no changes to the names and organisation of the libraries. “We will coordinate the system of all the public libraries in Macao, including integration, re-organisation and allocation of library resources, centralisation of administrative management, purchase and categorisation of library resources and provision of Inter-library Return Services in Macau.”

Throughout the year, the Cultural Affairs Bureau will progressively integrate and adjust the service areas and opening hours of the libraries. It has already proposed an extended working schedule of some venues, including the Red Market Library that might soon be open 24 hours a day.

Mozambique and China: A fast friendship into the future

The walls are alive