Abundant supply for the future 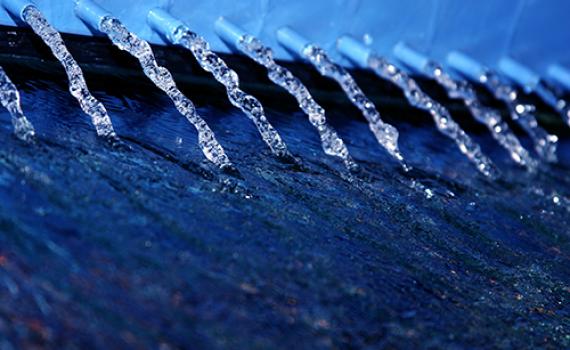 Abundant supply for the future

To meet rising demand, especially in Taipa and Coloane, Macao is going to build its largest water treatment plant and funding a major new pipeline that will bring water to it from Hengqin.

Nacky Kuan, executive director of the Macao Water Supply Company (Macao Water), said work on the new plant, in Seac Pai Van in Coloane, the first phase would start at the end of this year and that it would go into operation in 2019. It will cost around 800 million patacas and ensure an adequate future supply of clean water to the city.

“We are expecting an annual increase in consumption of four per cent over the next four years,” she said in an interview. “It will have a capacity of 100,000 cubic metres of water in the first phase. We can double this in the second phase, according to the development of the economy.”

It will be the fourth such plant in the SAR. There are two large plants in the peninsula and a small one in Coloane. Macao has two key reservoirs but receives 95 per cent of its raw water through pipelines from the mainland. Last November the Marine and Water Bureau signed an agreement with the People’s Government of Guangdong Province to build a new raw water pipeline between the Zhuhai Guangchang Pump Station and Estrada do Dique Oeste in Cotai; it will be about 15 kilometres long and will supply 200,000 cubic metres a day, including to the new plant at Seac Pai Van.

Over the last 15 years, the rapid development of the economy, especially in the casino and tourism sector, has caused a fast increase in demand for water.

There were several reasons for the increase last year. The average temperature in the city was 23.2 degrees Celsius, the highest since records were started in 1952 and compared to an average of 22.6 degrees in the 1980-2010 period. In the third quarter, the population increased by 2.3 per cent from a year earlier and the number of residential users rose by 5,000.

The government department in charge of water is the Marine and Water Bureau, led by Susana Wong Soi Man. “The new plant in Seac Pai Van was first proposed in 2014, to meet the fast-rising demand for water in Taipa and Coloane, especially in the Cotai Strip.

“Currently, we have 80-90 per cent of our water treatment facilities in the peninsula. This is not balanced. It is better to diversify the source of supply and have different plants. We hope to build it quickly.”

“We will need to borrow money, spread over 4-5 years,” said Kuan. “We will use imported equipment, mainly from Europe and some from the mainland.”

It will be supplied by water through the new pipeline from Hengqin to Cotai. “It is better to have two sources of supply than one, the current from Gongbei to Ilha Verde,” said Wong. “In case something goes wrong, we will have back-up.”

The pipeline costs 528 million yuan; the SAR government is paying the entire cost. It will supply 200,000 cubic metres a day.

One of Wong’s missions is to persuade individuals and companies to save water. “We are happy with our efforts. The population has increased and there are new apartment buildings but consumption has not increased so much,” she said.

In the five years up to the end of 2015, the population rose five per cent a year with an even faster increase in GDP, but domestic water usage rose only by 2.5 per cent a year and commercial usage by less than six per cent.

“Between October and March, we do publicity tours to schools and communities in different districts to teach people how to conserve water. We use TV advertisements and postcards. We promote water-saving toilets and shower caps, which can save 30 per cent of consumption. Housewives can use water to clean the rice, then the same water to clean vegetables and water the flowers. Since the average water bill is 100 patacas a month, the main incentive is not to save money but help the environment.”

“We explain how obtaining our water is not easy. It comes from poor areas in Guizhou and Guangxi; sometimes the people there sacrifice on our behalf. Water comes from reservoirs – and sometimes they do not have sufficient electricity, because the water is sent to us,” she said.

The water price for casinos and hotels is 30 per cent higher than for domestic users. In 2014, Wong’s department launched a plan to advise hotels how to save water, with plugs for bathrooms and showers.

“The recently built hotels, such as the City of Dreams and the Venetian, have been showing great support for our water-saving policies. For example, the Venetian has set up metres to monitor the use,” Wong said. “We do education with the staff. You must work on hardware and software. This year we will move on to smaller hotels, where the bosses may not be so open-minded.”

It is hard to reach tourists who come here for rest and recreation; many want to enjoy a long, slow bath. “For tourists, we have prepared post-cards and other items. We are not sure how effective they are. We want to establish the image of Macao as a city of water-saving. We cannot be too extreme. We cannot adopt the very aggressive measures taken against smoking during the last three years. We must do it slowly.”

Wong said that Macao’s demand was small, an average daily use of 150 litres a day, against 200 in the mainland. “We have very little industry and no agriculture, the biggest consumer in the mainland. The NGOs co-operate with us on water conservation. They go on tours to the reservoirs in Guangxi and Zhuhai to see where the water comes from.”

In Macao, the supply of water has always been managed by private companies. In the 1930s, clean water was only available to rich people. In the post-war period, the supply was unstable and its quality erratic.

As the economy grew, the Portuguese administration decided it needed a more reliable supplier. In 1985, it signed a 25-year contract with Macao Water, a joint venture of which the New World Group of Hong Kong and Suez Environnement of France held a 85 per cent stake and local investors 15 per cent.

This means that, if the cost of raw water in the mainland rises, the government bears the costs and works out how much Macao Water will pay. The cost of the raw water is not directly passed to the residents.

“Ours is a monopoly business, but the profit is not so high,” said Kuan. “There is no ceiling on this return. But, if we want to raise the price of water, it must be approved by the government.

“We are a small to medium-size firm, with around 250 staff and profit of tens of millions of patacas. That is small compared to, say, the telecommunications company. But, while we are small, we have a very important mission and a very big responsibility,” she said.

The company is aided in its work by a dozen koi fish who swim in a pond next to the staff canteen and can be seen on close-circuit television 24 hours a day. “They are very sensitive to imperfections in the water,” said Kuan. “If one’s health condition deteriorates, then we know there is a problem.”