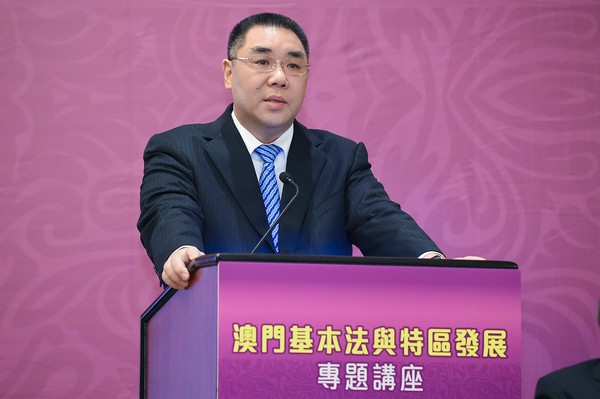 Chief Executive (CE) Fernando Chui Sai On said Wednesday his government would do more to strengthen local residents’ – particularly young people’s –  understanding of the development of the nation and local society, as well as increase their knowledge and recognition of the “One Country, Two Systems” principle.

Chui made the remarks in a speech at yesterday’s seminar titled “The Macau Basic Law and the Development of the Macau Special Administrative Region” at the Sheraton Macao Hotel in Cotai.

Chui also said that he and his new team of principal officials will come up with measures to improve residents’ livelihoods and the economy.

Chui will head the local government for another five years from December 20.

Meanwhile, talking to reporters on the sidelines of the seminar, former Macau Basic Law Drafting Committee member Lu Ping, a former director of the State Council’s Hong Kong and Macau Affairs Office, said that Macau was a good example of the successful implementation of the “One Country, Two Systems” concept.

Asked by reporters for his comments on the implementation of the Hong Kong and Macau Basic Laws, he said that Macau had shown that the policy of “One Country Two Systems” is correct while Hong Kong was in “chaos”.

Fellow former Macau Basic Law Drafting Committee member Chen Ziying, a former vice-director of the Hong Kong and Macau Affairs Office, said he was glad that Macau has changed for the better.(macaunews-macaupost)