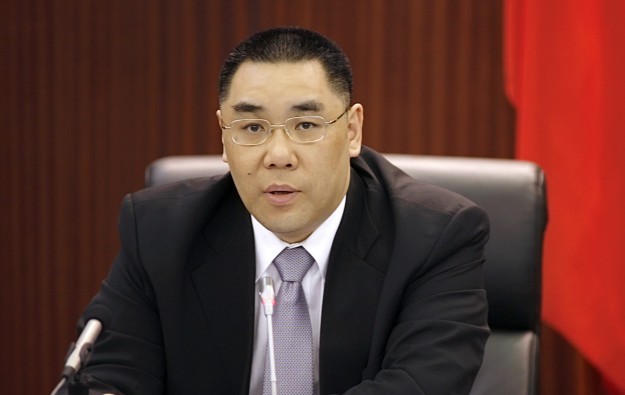 Government to set up ‘sovereign wealth fund’ in first half of the year: Chui

Chief Executive Fernando Chui Sai On has told the legislature that he expects the government to launch a new application round for public housing flats during his last term that ends in December 2019.

Chui made the remarks during a Q&A session in the legislature’s hemicycle on Friday.

Chui attended the session to answer questions from 29 lawmakers in the 33-member legislature. Several lawmakers raised questions about the housing issue, such as public housing construction progress and public housing application procedures, as well as the high cost of housing in the private market.

Since the law took effect, the government has launched two application rounds – one for 1,544 HOS flats in early 2013 and the other for 1,900 HOS flats in late 2013. The number of nuclear family applications exceeded the number of flats on offer in the two batches, which meant applicants in the other two groups had no chance of obtaining a flat. In the second application period that started in late 2013 and ended in early 2014, the Housing Bureau (IH) received about 42,000 applications.

For the second application period for the 1,900 HOS flats, the bureau announced later that year that about 38,000 applications qualified for the purchase of a HOS flat in its preliminary assessment. In late 2014, the bureau released a priority list processed by a computerised draw in which 1,900 of the about 38,000 applicants for HOS flats will be eligible to purchase the available flats.

In late January this year, the bureau said that it had finished a detailed and final assessment of the 1,900 applications. The result was that only 992 applications were deemed eligible for the purchase of an HOS flat, adding that 880 applicants had chosen their HOS flats at that time. According to the statement, the bureau will continue to carry out the final assessment of the remaining applications, until the 1,900 available HOS flats have been sold.

For social rental housing, the last time the government launched an application round for such flats was in 2013.

Chui also said that the government was determined to build a public housing project on the plot of the abandoned La Scala luxury housing project in Taipa, with the aim of helping tackle residents’ housing needs.

The plot, which lies at the bottom of Big Taipa Hill, is close the airport and quite near the city’s solid waste incineration plant.

Some civic leaders and commentators have opposed the government’s plans to build such a large-scale public housing project on the plot. Some petitioners have claimed that the Pac On incineration plant makes the plot unsuitable for human habitation.

Meanwhile, Chui also said that the plot where the city’s greyhound stadium is located will not be earmarked for commercial projects or private residential projects, adding that the government will launch a public consultation on how the plot will be used.

The government announced last year that the operator of the greyhound racetrack, Macau Yat Yuen Canidrome Co. Ltd, will have to vacate the racetrack in Fai Chi Kei by July next year.

Some civic leaders have called for a public housing estate to be built on the plot. Others have suggested that the plot be converted into a sports and leisure facility.

Scholar says she will be middle-of-the-road-lawmaker