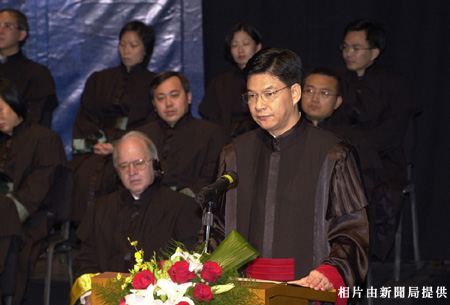 The Portuguese-language newspaper cited a report in China Profiles, which was distributed earlier this month in Beijing and published a five-page article by Liu Zhikun and Li Shuaizhu, who said that “Ho is probably the strongest candidate for Chief Executive, in the eyes of Macau’s population and the media”.

China Profiles, a publication of the Chinese Communist Youth League, is directed by Zhou Changhui, member of the Communist Party, reported Ponto Final, which added that the magazine, which has a print run of 6,000, published a photo of Ho Chio Meng on its cover and the headline read: “Ho Chio Meng – Keep Guard on the Rule of Law in Macau with Honesty”.

The Portuguese newspaper said that the reference to Ho Chio Meng in a publication from mainland China is “the first unequivocal sign from Beijing”, and shows that the youth division of the Communist Party believes that there is only one man in Macau that meets the requirements to succeed Edmund Ho: The Chief Prosecutor of Macau SAR.

China Profiles published the profile of its chosen person, highlighting the fact that he comes from a family that has been in Macau for five generations.

Ho Chio Meng’s personal characteristics are featured in the report, which noted that he “is a very important person in Macau society. His popularity is more than his position as Chief Procurator, but because he is contributing his talents to the practice of ‘One nation, two systems’ policy.”

According to the magazine, “the 10th anniversary of Macau’s handover is coming (…). Focusing on the election of the next Chief Executive, many people unconsciously cast their sight on Ho.”

The publication also wrote that the next Macau Chief Executive should be proficient at law because “Macau still has a long way to go in the construction of the legal system”. The Chief Executive should be also be “clean, (…) with courage and bravery to defy power; (…) have roots from the region” and finally, “have no linkage with businessmen,” reported the publication.

“Its seems that the above are only for Ho Chio Ming,” the magazine said.

China Profiles also explained that “his patriotism and good behaviour gained him the opportunity of being promoted as Chief Procurator on 20 Dec., 1999, at the age of 44. He succeeded to his position in 2004.

The authors of the article believe, however, that the election of Ho Chio Meng as Chief Executive is “out of his control”. In case he was actually really elected, from the view of Mr. Ho, “it is just a change of role he serves the Macau citizens”.

Ponto Final noted that even though the election of the Chief Executive of Macau is formally done by a 300-member election committee, in practical terms, support from Beijing is essential to ensure the success of the election.

The newspaper also reported that names such as Fernando Chui San On and Francis Tam Pak Yuen, the Macau secretaries for Social and Cultural Affairs and for the Economy and Finance, respectively, are also potential candidates for the post.