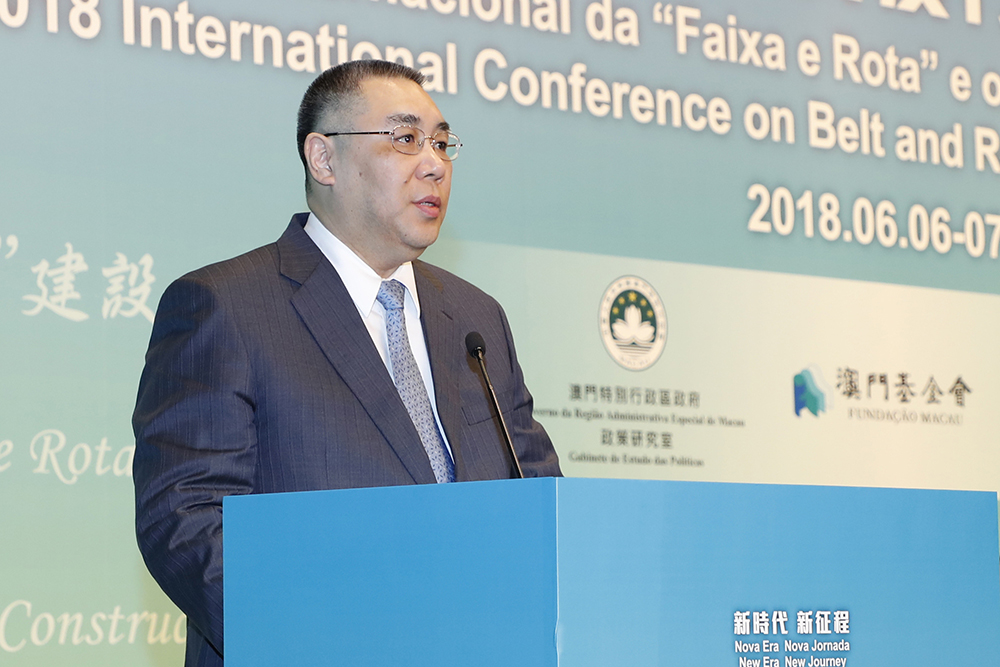 Chief Executive Fernando Chui Sai On said Wednesday that the local government will continue to support the building of “Belt and Road Initiative” (BRI), adding that in building the BRI, the central government had given Macau enormous support, and it was also Macau’s responsibility to contribute.

Chui made the remarks during a speech at the opening ceremony of the 2018 International Conference On the Belt and Road and Macau’s Development at Macau Tower.

In contributing to the BRI, Chui said that Macau will exercise the advantages of “one country, two systems”，and combining advantages such as being the starting point of ancient maritime silk road, long history of trade with Western countries, and the co-influence of Chinese-western cultures, the large percentage of overseas returned Chinese in the population, adding that with these advantages, Macau will “open” a “new journey” in building the BRI.

According to Macau Post Daily Chui also mentioned his visit to Cambodia and Thailand last month, where various co-operation agreements were signed in the fields of trade, tourism with both countries, and the Youth Leaders round-table was held with the members of the Cambodian government, adding that these would contribute in practice to the BRI.

Vice Minister of Ministry of Commerce Gao Yan said that the central government had been supporting Macau in building the Guangdong-Hong Kong-Macau Greater Bay Area (GBA) and deepening the co-operation of tourism among the places, and strengthening communication across various cultures in different places.

Gao also said that the central government would continue to implement the Mainland and Macao Closer Economic Partnership Arrangement (CEPA) policy including relevant supplementary agreements with enterprises, to deepen the investment from the mainland to Macau, and increase co-operation between Macau and the mainland’s coastal cities, adding that these are to create a better environment for the BRI.