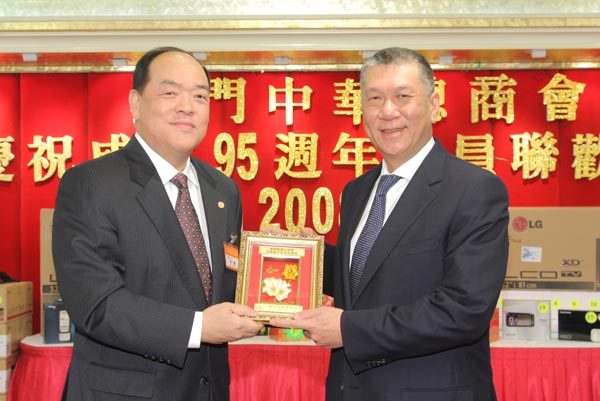 Macau, China, 6 Jan – Businessman Ho Iat Seng, who has been mentioned as one of the potential candidates for the Chief Executive of the Special Administrative Region of Macau from 20 December 2009, said he does not plan to compete for the position, Tuesday’s edition of Hoje Macau reported.

The newspaper reported that 51-year old Ho Iat Seng, one of the owners of the Ho Tin Industrial Company in Macau, and vice-president of the Macau Chamber of Commerce, gave assurances that he has no plans to run for office.

Ho Iat Seng, according to the newspaper, “was categorical when he told journalists that he does not have plans to be a candidate in the elections this year for the position of Macau Chief Executive”, in place of Edmund Ho Hau Wah, who will have completed two terms of five years each, and will therefore not be able to run again.

The Macau businessman’s statements were made at the end of a visit to the Chamber of Commerce by officials from the Liaison Office of the Central People’s Government in Macau.

Apart from Ho Iat Seng, other names that continue to be mentioned as potential candidates for Macau Executive include secretaries Fernando Chui Sai On and Francis Tam Pak Yun and Ho Chio Meng, President of the Court of Final Appeal in Macau.

Chinese political analysts say that the theory that the future Chief Executive of Macau will come from the current government is becoming increasingly likely, as it represents a solution of continuity, similar to what was done in Hong Kong.

Hoje Macau also said that Fernando Chui Sai On “is the person that has been most talked about as having a strong chance of presenting his candidacy in the coming months”.

A MacauNews poll about “Who is likely to be the next Chief Executive” showed that the Secretary of State for Economy and Finance Francis Tam Pak Yun is the favourite amongst a group of four names (Ho Iat Seng, Fernando Chui Sai On, Francis Tam Pak Yun and Ho Chio Meng).

The announcement of the potential candidates for the Chief Executive of Macau is expected to be made by May and the election of Edmund Ho’s replacement is expected by the middle of this year.

“Tam Pak Yun (59 years old), responsible for Economy and Finance, has proved he has the ability to create dialogue and manage difficult situations. He runs the Macau government’s most delicate portfolio, namely the end of the gaming industry monopoly, and experienced the entry of an enormous amount of imported labour into the Territory to support economic development,” according to Macau Monitor.

Tam, who has been involved in Chinese politics since the 80s, got his degree in Business Administration in the United Kingdom and actually entered politics recently (post-1999), after a great deal of business experience in the textile and apparel sectors.

Macau Monitor also reported the background of Chui Sai On (51 years old), who is responsible for Social Services and Culture in the government and got his degree in the United States.  “He is a specialist in health sector administration, and began his political career in local politics between 1992 and 1995 as a deputy of the Macau Legislative Council”.

Chui’s time in office has been marked by important events such as UNESCO’s decision to recognise Macau as a World Heritage destination, and he successfully prepared international sporting events such as the Lusophone Games, East Asian Games and Asian Indoor Games.

Government to set up ‘sovereign wealth fund’ in first half of the year: Chui