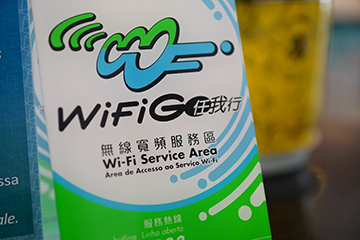 The now defunct Telecommunications Regulation Bureau (DSRT) failed to properly monitor and supervise Macau WiFi GO service so that WiFi GO service points in the city are affected by poor connection quality, the Commission of Audit (CA) said in report on Monday.

The report says that the poor connection quality not only represents a waste of public money but also impacts tourists when they use the WiFi service, which could give them a negative image of Macau.

The report can be downloaded from the commission’s website, in Chinese
and Portuguese language versions.

According to the report, the government launched the WiFi GO service in September 2010. The report points out that the bureau spent MOP 161 million on the installation of the WiFi GO network and its operational costs until late March last year.

The objective of the audit was to assess whether the bureau had properly planned its WiFi GO service and exercised proper supervision of its service quality, considering that a number of residents and lawmakers have complained about the difficulty of connecting to the network and its low speed.

There were 183 WiFi GO service points in the city in late March 2016, according to the report. The 183 service points included border checkpoints, major sightseeing sites named in the Historic Centre of Macau on the UNESCO World Heritage list, museums, art galleries, parks, government buildings and offices, sports facilities, hospitals, health centres, and libraries.

According to the report, the commission carried out tests at 30 selected WiFi GO service points in January 2016. The report says that the speed test was considered unsuccessful when the WiFi was disconnected during the process and the download speed was lower than 1 Mbps during the process.

The report concludes that the pass rate was 66.6 percent (0,85
multiplied by 0.783) for the tests carried out at the 30 service points
in January 2016. The report also says that the pass rate for indoor
spaces was 84.5 percent, while the pass rate for outdoor spaces was
a mere 48.6 percent.
The report also says the bureau did not have a proper procedure
to ensure that the service providers of the WiFi GO service would
promptly rectify the issues after users could not connect to the
network or the speed was slow.
According to the report, the bureau outlined in a number of
documents two general objectives and six specific objectives for the
WiFi GO service before it launched the service in 2010.
The report says that most of the eight objectives were merely
conceptual, such as promoting Macau’s image and stimulating
economic development. However, the bureau did not define any
indicators on whether the objectives were met or not, and neither did
it specify how the objectives would be achieved.
The report says that, consequently, the bureau made arbitrary
decisions when setting up WiFi GO service points in different
locations around the city.