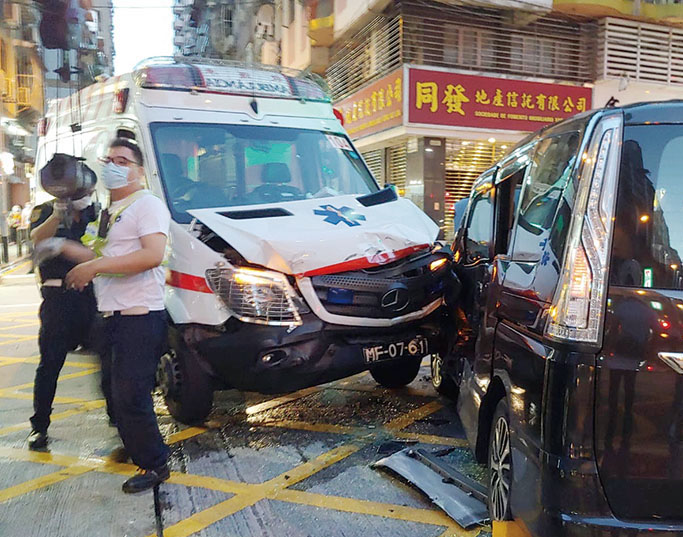 According to a statement by the bureau, eight people were taken to hospital, of which seven were injured, including four paramedics.

The accident occurred at about 7 p.m. at the junction of Avenida de Horta e Costa and Rua do Almirante Costa Cabral, near Pui Ching Middle School.

While the ambulance was travelling along Rua do Almirante Costa Cabral taking a pregnant woman and a male family member to the private Kiang Wu Hospital, the 7-seater people carrier was driving along Avenida de Horta e Costa when the two vehicles crashed at the junction near the school.

The ambulance’s bonnet, grille, bumper and headlights were damaged and the passenger-side door and front wing of the people carrier were dented. The firefighters said that five people in the ambulance sustained minor injuries, comprising four paramedics and one accompanying family member of the pregnant woman. The male family member suffered a head injury and felt dizzy. The pregnant woman was uninjured. In the people carrier, two people were injured and both were taken to hospital for treatment. The cause of the accident is under investigation, according to the statement.