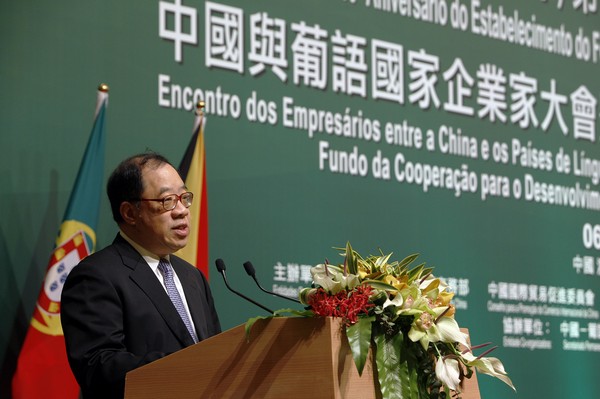 Visitor arrivals drop 99.5% in May

Secretary for Economy and Finance Francis Tam Pak Yuen said Wednesday he hoped that progress be made in the next three years through the setting-up of three new centres to strengthen Macau’s role as a business-service hub between China and Portuguese-speaking countries.

The policy secretary did not mention the possible establishment of an arbitration centre for commercial disputes between China and Portuguese-speaking countries in Macau that was announced by Commerce Minister Gao Hucheng in a press conference about the 4th ministerial conference of the Forum for Economic and Trade Co-operation between China and Portuguese-speaking Countries on Tuesday.

When Vice-Premier Wang Yang addressed the opening ceremony of the forum on Tuesday he mentioned the three centres referred to by Tam.

Tam said that Vice-Premier Wang Yang had given Macau a clear direction of what it has to do next to bring into full play Macau’s role at a business-service platform for trade and investment co-operation between China and Portuguese-speaking countries.

“It’s the first time that a state leader has given Macau such precise directions to follow,” Tam said, “We already have a foundation [for the three future centres], so now it’s about how we strengthen the functions of these services so that they truly become a centre.”

“We’ll need to work with the Ministry of Commerce to work on the three centres. Time is pressing but we hope that we can show the achievements of the three centres at the next forum, which will be held in three years’ time,” Tam said.

Tam said that none of the centres would necessarily require a physical office but that they needed to make progress that would let people “feel” that Macau is a hub providing services in business and trade, products distribution and conventions and exhibitions.

“You need to broaden the concept [of the centres],” Tam told reporters, explaining that the product distribution centre could mean that Macau takes products from Portuguese-speaking countries to trade shows and fairs in the mainland and mainland enterprises that want to order the products can do so through an agent in Macau. The products would then be shipped directly to the mainland from the Portuguese-speaking countries.

“So it’s not necessary to have an office in Macau,” Tam said, “The same goes for the convention centre. It doesn’t necessarily mean that we have to hold all the fairs in Macau. We can plan them in Macau.
” (macaunews)