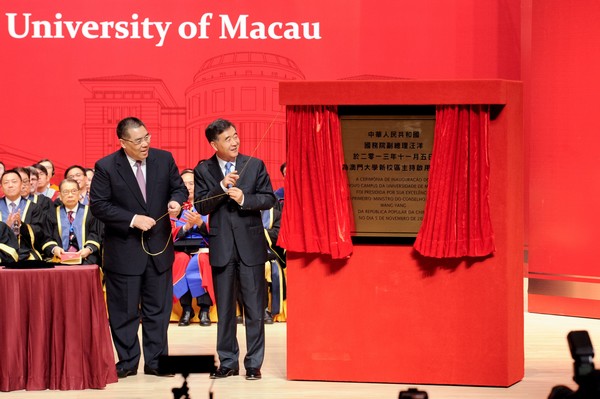 Wang, accompanied by Chui, unveiled a plaque, which marked the official opening of the new campus.

Chui said in his speech that the new campus “embodied” the central government’s support for Macau’s education and the success of the Macau-Guangdong co-operation model. Chui suggested the university take advantage of the campus’s facilities to educate more professionals for Macau by enhancing education and research levels.

The national and university anthems were played to mark the end of the inauguration ceremony.

Wang then toured the new UM campus, where he met and struck up a brief conversation with a group of students from Shandong about their lives studying in the university. He praised the campus for its beauty and said he hoped that its students would seize the opportunity to use the facilities for their academic pursuits.

Wang then ended his two-day trip to Macau and returned to the mainland via the Lotus Bridge . He will attend a China-Brazil economic co-operation summit in Guangzhou Wednesday.(macaunews)