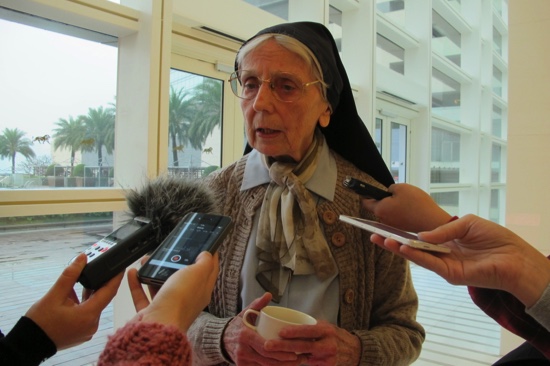 Schedule of by-election procedures are ready according to the government

The Good Shepherd Centre announced on Thursday in a press conference at MGM that it will organise a one-day seminar next Tuesday on “Business Leadership to End Human Trafficking & Modern Day Slavery” in collaboration with Vital Voices Global Partnership – an international non-profit and non-governmental organisation (NGO) on women’s rights and empowerment – about human trafficking and slavery.

Washington-based Vital Voices was founded by Hillary Clinton and others in 1999.

Devoy underlined the severity of the problem, pointing out that human trafficking is the second largest criminal activity in the world after drug trafficking.

“The term ‘human trafficking’ is already becoming outdated. Now, the word that is being used is ‘human slavery’. The International Labour Organisation estimates that at present there are 21 million victims of human trafficking and [they] are human slaves,” she said.

“This is one of the greatest human rights violations of our time. There are more slaves in the world than at any other time in human history,” she added.

Devoy also said that human trafficking victims are engaged in forced labour, adding that many businesses around the world may be unaware that products they purchase may have been produced by them. She urged businesspeople to be mindful about this fact when buying goods for their operations.

Asked whether Macau’s official sex trafficking statistics reflect the actual situation, the centre’s Debbie Lai Choi In said that victims may have been tricked into coming to Macau for a genuine job only to be forced to become sex workers. Devoy acknowledged that many of the women refuse to co-operate with the police and that they claim that they have come to Macau of their own free will. But Devoy noted that they may be just 14 to 15 years old but be able to stay in expensive hotels, suggesting that they are lying.

“I think the statistics is accurate as far as the numbers the police can find and arrest are concerned because very often it’s not possible to get anyone to testify… and then they can’t take the case to court, that’s the problem,” said Devoy.

She said that local hotels should train their staff to detect people who may be involved in human trafficking or their victims, adding that Sandy Russell, vice president of Asia-Pacific commercial operations of Carlson/Rezidor Hotels, will talk about the topic at the seminar.

The conference will take place at MGM Macau on Tuesday between 9 a.m. and 5 p.m. Representatives of local companies, casino operators, worldwide organizations, and human trafficking researchers and experts from the United States and Asia have been invited to speak. (macaunews/macaupost)

Macau prison is 82 per cent full