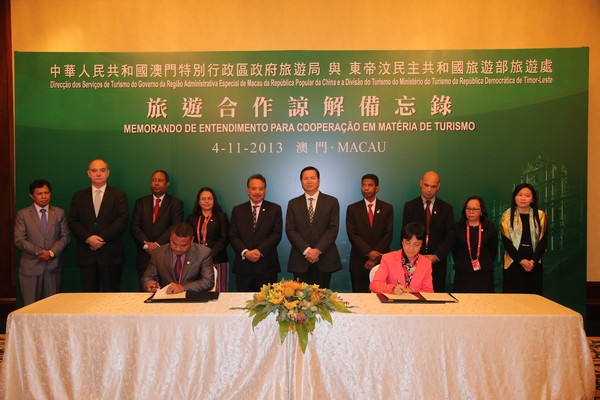 Property prices to drop up to 10 pct this year: JLL

The Macau Government Tourism Office (MGTO) on November 4 signed a memorandum of understanding with the Tourism Ministry of Timor-Leste, to promote ties between the two sides. It was one of several agreements signed during the Forum for Economic and Trade Cooperation between China and Portuguese-speaking countries held in Macau this week.

The MOU has eight objectives, including the training of people in the tourism industry: technical support and co-operation: planning of tourism events: exchange of information of management and certification: the development of co-operation and partnership between small and medium-size tourism companies: exchange of information on tourism market trends and other data: assistance in setting up an incentive system to promote the tourism industry:  promotion of exhibitions and business meetings: and training personnel for all these programmes.

The agreement was signed by Maria Helena de Senna Fernandes, director of the MGTO, and Silvino  Sampaio Goncalves, director-general of tourism in the Ministry of Tourism of Timor-Leste. Senna Fernandes said that the eight objectives of the MoU covered different sectors and that the two sides would continue to exchange views and accelerate the training of personnel. She said that this was a long-term agreement and would develop over time. Three years ago, the MGTO signed MoUs with Cabo Verde, Mozambique and Guinea-Bissau, which also contained projects for training.

Also on November 4, China Commerce Minister Gao Hucheng signed four agreements with representatives from Guinea-Bissau, Timor-Leste, Cape Verde and Mozambique, which call for economic co-operation and development between the two governments.  Gao said that, in 2012, bilateral trade with Guinea-Bissau was US$23 million, an increase of 18.9% over 2011, with good development in the areas of agriculture and fish products.

He signed a similar agreement with the delegation from Timor-Leste. He said that, in 2012, bilateral trade was US$63.16 million, a sharp increase from the US$10.67 million in 2003, the first year after diplomatic relations were established. “We hope that the two sides will expand the scope of bilateral trade and co-operation, especially in the fields of agriculture, energy and mining and infrastructure,” Gao said.

He signed a similar agreement with the delegation from Cabo Verde. Gao said that, in 2012, bilateral trade reached US$57 million, an increase of 15.5 % over 2011. The two sides are discussing investment co-operation in fishing, telecommunications and transport.

He also signed a similar agreement with the delegation from Mozambique. Gao said that bilateral trade last year reached a record US$1.34 billion and that China had invested nearly US$400 million in many sectors, including agriculture, construction materials, energy and digital television. China is also training nearly 1,000 technical and management personnel from Mozambique.(macaunews)