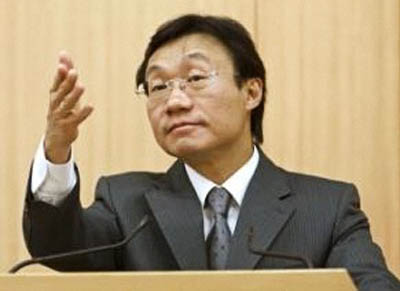 Chinese premier arrives in Macau to attend the Ministerial conference

Kostantin Bessmertny works on display at Macau Museum of Art

The government’s chief spokesperson Alexis Tam Chon Weng, who heads the office of Chief Executive Fernando Chui Sai On, said yesterday that a “referendum” which three groups plan to hold next month was “illegal” and “invalid.”

Tam made the remarks after a press conference at Government Headquarters which he hosted to announce details of the 8th Asia-Pacific Economic Co-operation (APEC) Tourism Ministers Meeting (TMM), although reporters attending the press conference did not ask any questions about the upcoming “referendum.”

The three organisations, which Tam described as “three small groups,” comprise Macau Conscience, Open Macau Society and Macau Youth Dynamics. They announced on Monday that they would hold a so-called “civic referendum” at the end of next month on universal suffrage in 2019 and this year’s chief executive election.

Addressing Monday’s press conference at the headquarters of the grassroots New Macau Association (NMA), political activist Jason Chao Teng Hei, a key member of Macau Conscience and Open Macau Society, said that the “referendum” was slated to be held online from August 24-30, while the groups also plan to set up “polling stations” at four locations in the peninsula and one in Taipa on the first and final days of the voting period.

According to the three groups, residents taking part in the “referendum” would be asked three questions: the first will ask residents whether or not the chief executive should be elected by universal suffrage in 2019, while the other two questions depend on two different scenarios: if there is a only one candidate running in next month’s chief executive election, residents will be asked whether they have confidence in the candidate or not; if there is more than one candidate, they will be asked which one they would prefer.

So far Chui is the only person who has said that he will stand in the election, although he has still to officially announce his decision. The 2014 chief executive election by a 400-member committee will be held on August 31. A total of 344 of the members were elected by association representatives, while the others are ex-officio members, lawmakers elected by their peers and religious figures chosen by their respective organisations.

Tam said that the government “resolutely opposes any small groups carrying out an act challenging the basis of the rule of law in Macau.”

“Macau is a region that follows the rule of law, there is no constitutional basis for any form of so-called referendum…it is illegal, has no legal basis and is invalid,” Tam said, adding that “the election of the chief executive in 2014 will be carried out in line with the Basic Law and the Chief Executive Election Law”.

When asked by reporters as to which law would be violated if such a “referendum” takes place and what the government would do regarding its perceived “illegitimacy,” Tam declined to answer, merely insisting that the “referendum” was “illegal” and the government resolutely opposed it.

When asked further by reporters as to whether he would withdraw his claim that the “referendum is illegal,” Tam said that “there was no need” to do so.

Responding to Tam’s comments, Chao told reporters outside Government Headquarters last night that Tam’s statement was “complete nonsense” by claiming that the “referendum is illegal.”

Meanwhile, the Liaison Office of the Central People’s Government in Macau said in a statement late last night that it “completely agrees” with the stance of the local government on next month’s “civic referendum” as it is in line with the law.
The office said in the statement that “responding to questions about the referendum asked by reporters a person-in-charge of the office said that “a referendum in Macau “has no legal basis, is illegal and invalid”.

The office said in statement that any act against the Basic Law and legal system “should not have public support”, stating that it believes Macau people should treasure the city’s development.

Anti-government activists recently held a similar “referendum” in Hong Kong. Both the Hong Kong and central government described that “referendum” as illegal as well. (macaunews/macaupost)

Govt fines Venetian 40,000 patacas for transferring data to US