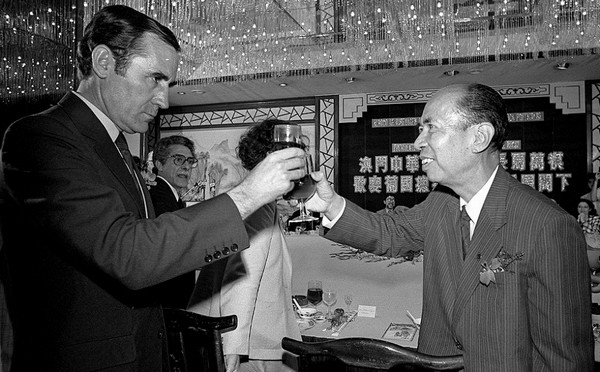 Chief Executive Fernando Chui Sai On Tuesday expressed his deep condolences to the family of Ma Man Kei, a former vice-chairman of the National Committee of the Chinese People’s Political Consultative Conference (CPPCC), who died on Monday in Beijing, aged 95.

According to a statement from Chui’s office, Chui praised Ma’s contribution to the city and the nation.

Meanwhile, CPPCC Vice President Edmund Ho Hau Wah also conveyed his condolences to the Ma family, according to a statement released by his office , praising Ma for “loving the country, loving Macau and his hometown”.

Ma headed the influential Macau Chamber of Commerce and was a long-time lawmaker.

Talking to reporters on the sidelines of Tuesday’s plenary session, Legislative Assembly President Ho Iat Seng, the city’s only member of the National People Congress Standing Committee, thanked Ma for his contribution to the legislature and for having been “so nice to everybody”.

The patriotic businessman and “senior political adviser of the mainland” died of illness, Xinhua reported.

Ma, regarded by the state media as “a distinguished social activist, patriot and close friend of the Communist Party”, was appointed vice-chairman of the eighth, ninth, 10th and 11th National Committee of the Chinese People’s Political Consultative Conference since 1993.

He played a significant role in preparing for the then Portuguese colony’s handover before 1999. He was vice-chairman of the Committee for Drafting of the Basic Law for the Macao Special Administrative Region.

Ma was one of Macau’s first business leaders who forged ties with the Communist Party.

He began to build the relationship with the Communist Party in 1947.

Ma provided support for the Communist Party before it toppled the Kuomintang in 1949.

During the 1950s, he proactively helped the Communist Party to rebuild the country by exporting necessities to the mainland. He enjoyed close links with earlier generations of Chinese leaders.

In 1998, reformist leader Deng Xiaoping personally wrote a title for a poetry publication of Ma. In 2007, the country’s then president Hu Jintao is said to have paid Ma a visit at a Beijing hospital during the Lunar New Year.

The tycoon had been treated for heart problems in the People’s Liberation Army General Hospital in Beijing since 2007.

Ma was known for sending basic materials to the mainland when it was under containment by Western powers in the 1950s.

Ma was born in October 1919 in Nanhai, Guangdong, and grew up in Guangzhou, where he ran his father’s food trading business after his father died. He started a business in Hong Kong in the 1930s and moved to Macau and founded many businesses and charity organisations in the ’40s.

The State Council’s Hong Kong and Macau Affairs Office sent tributes to Ma’s family, praising him for his “lifelong patriotism”.

He is survived by seven daughters and two sons.(macaunews/macaupost)

Record of 195 candidates running for 14 seats

Sheraton Grand and Lisboeta as 2 choices for ‘quarantine hotels’