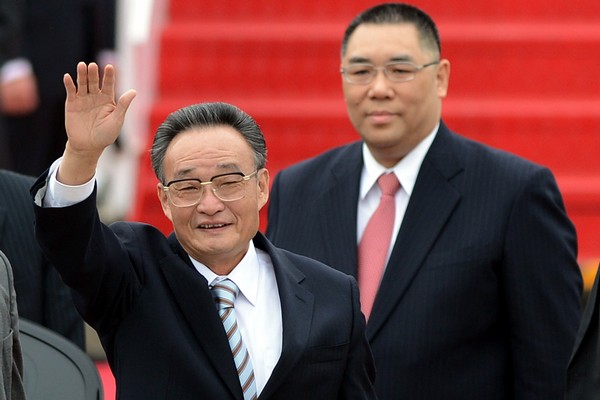 Macau’s future will be even better says Premier Li

The nation’s top legislator arrived in Macau  where he was greeted by Chui, Ho, who is now a vice-chairman of the National Committee of the Chinese People’s Political Consultative Conference (CPPCC), Liaison Office of the Central People’s Government Director Bai Zhijian, Foreign Ministry Commissioner Hu Zhengyue, Legislative Assembly President Lau Cheok Va and other senior local and mainland officials.

According to The Macau Post Daily, Wu made the comments in his speech prior to attending a welcome banquet at the Macau Dome in Cotai after a string of meetings and a visit to the University of Macau’s future campus in Hengqin shortly after his arrival at the local airport.

Wu said that in the 10 hours since he stepped off the plane, he saw a “bustling, clean and beautiful Macau with high-spirited citizens.”

“Macau has a small surface area with not that many people, but it has a special status in the big family of the Motherland,” Wu said, adding, “I’ve always wanted to come and have a look.  My dream has finally come true today, and like the saying goes: seeing is believing.”

Wu told the banquet of over 300 attendees that he was “happy to see the huge achievements that Macau has made” since its return to the Motherland in 1999, underlining the city’s sustainable economic growth, noticeable improvement in people’s livelihoods and tolerant and harmonious civil society.

“These achievements are the result of the leadership of the former chief executive and his government, and they are also the result of the great support of the central government,” Wu said, adding, “This is all because of the comprehensive implementation of the ‘One Country, Two Systems’ policy and the Macau Basic Law.”

“We believe that the [current] chief executive and his government will continue to lead all sectors of Macau society to manage Macau well, develop it well, achieve new things and create new glory [for Macau],” Wu said.

Immediately upon arrival, Wu went to the Liaison Office’s San Chok Un (“Fresh Bamboo Courtyard”) guesthouse on Penha Hill to meet Chui where Wu said it was his first to visit Macau after having been to all the mainland’s provinces, autonomous regions and municipalities, and special administrative region Hong Kong.

Besides attending the celebration of the 20th anniversary of the promulgation of Macau’s Basic Law today, Wu said he also wanted to take the opportunity of his three-day working visit to see the development of Macau in the past 13 years since its return to the Motherland as well as the history and culture of the city, and “experience the celebratory spirit” of Macau.

Chui thanked Wu and the NPC Standing Committee for the strong support given to Macau, especially concerning the city’s political development allowing the smooth amendments to the city’s two electoral laws – the method for electing the chief executive and the formation of the Legislative Assembly.

Chui told Wu that economic development and improving people’s livelihoods continued to be important factors for Macau’s future, stressing that an improved living standard was essential to development.

Wu then visited the future University of Macau (UM) campus in Hengqin and was given a presentation of how the campus, which is 20 times bigger than the current one in Taipa, was made possible because of the strong support of the central government and close co-operation with the Guangdong government.

Wu commented on the campus surroundings, praising it for its “character” and pointing out that it only took three years to build it.

The one-square-kilometre campus will come under Macau’s jurisdiction later this year.

According to Xinhua, Wu noted that the project has served as an innovative model of the close co-operation between Macau and the mainland in various fields including education, scientific research, city planning, social services and administrative management.

Wu urged the University of Macau to work closely with the mainland’s universities and institutions.

Wu was also quoted as saying that the local government “should attach great importance to the region’s long-term development and explore a development path that caters to local realities.”

The meetings were followed by a welcome banquet, where Wu thanked Chui for especially organising a series of activities for him.

Wu’s agenda continues today with the inauguration of a Macau Basic Law pavilion and the launch of a book on the city’s highest law.

He is scheduled to deliver a keynote speech at a seminar marking the 20th anniversary of the promulgation of the Macau Basic Law, which has been the city’s highest law since the 1999 handover.

Today’s programme includes a presentation of the city’s development this afternoon and a reception marking the 100th anniversary of the Macau Chamber of Commerce (ACM). Wu, who will retire next month, will leave Macau tomorrow.(macaunews)